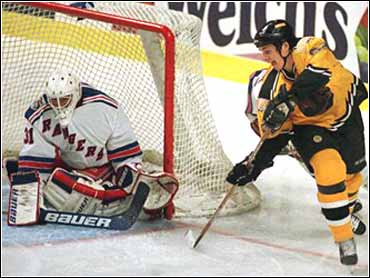 Mired in their worst road slump in 35 years, the New York Rangers turned to a rookie goalie Saturday.

The Rangers were beaten 4-1 by the Boston Bruins, extending New York's road losing streak to 11 games, the team's longest since the 1965-66 season.

"We're as bad as we can be," Rangers coach Ron Low said.

Mike Richter, the Rangers' top goalie, sat out his 10th game despite having fluid drained from his surgically reconstructed left knee earlier in the week. So Vitali Yeremeyev started in the net for New York.

He lost his shutout and perhaps his confidence in the first period, when the Bruins took a 2-0 lead.

"I can't see how you can blame this loss on one player," Low said. "We gave up two goals on power plays, one while we were short-handed, and that wasn't Vitali's fault."

Bill Guerin scored a pair of goals, including the 200th of his NHL career, and Mikko Eloranta also added a pair as the Bruins won their third consecutive game and reached the .500 mark for the first time since Oct. 28.

"The hard lessons this team learned early in the season are starting to pay off," said Bruins coach Mike Keenan. "They are playing hard and they are playing for each other now. It's something we've developed together."

The win matched the longest streak of the season for Boston. Three other times this season, all in October, the Bruins won three consecutive games.

"We're on our heels," said Rangers defenseman Richard Pilon. "We're a desperate team and we have to play like every game is our last one."

Yeremeyev's NHL debut was spoiled early, when Guerin gave the Bruins a 1-0 lead 33 just seconds in. His 24th goal went in off the skate of New York's Brian Leetch.

Radek Dvorak cut the lead to 2-1 17 seconds into the second period with his 11th goal. He scored from the top of the right faceoff circle.

But Eloranta made it 3-1 at 4:24 of the second period with his sixth goal. It came as the Bruins were short-handed. He added his seventh goal at 7:38 of the final period.

"The last time I scored a goal in a game I didn't play in the next one," Eloranta said. "That was frustrating, so I hope this time it's different."