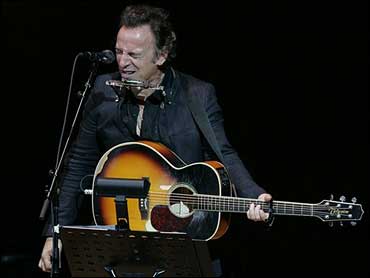 Bruce Springsteen was back in familiar territory with a rehearsal show Monday night on the city's boardwalk, which has become known worldwide through his songs.

The show at the oceanfront Convention Hall was the first of two benefit rehearsals for Springsteen and the E Street Band, who are about to embark on their first tour together in four years. They will also play Tuesday night.

The hall isn't far from the clubs -- many now closed -- where Springsteen and the band rose to fame in the 1970s. Springsteen has used Convention Hall for other pre-tour rehearsals.

A native of nearby Freehold, the 58-year-old rocker still lives in Monmouth County.

Springsteen and the band are to begin a tour in support of their new album, "Magic," which is due out Oct. 2. The tour opens with a show in Hartford, Conn., that night.

Other dates include Oct. 9-10 at the Continental Airlines Arena in East Rutherford, N.J., and Oct. 17-18 at Madison Square Garden in New York.

"Magic" is the Rock and Roll Hall of Famer's first album with his longtime New Jersey mates since the Sept. 11-inspired "The Rising" in 2002. Their 15-month tour in support of the album has sold out stadiums and arenas around the globe.

Aside from the atmospheric title track, "Magic" returns Springsteen to rock 'n' roll, and all 11 songs are new. He released a solo acoustic effort, "Devils & Dust," in 2005 and the folk-inspired "The Seeger Sessions" last year.