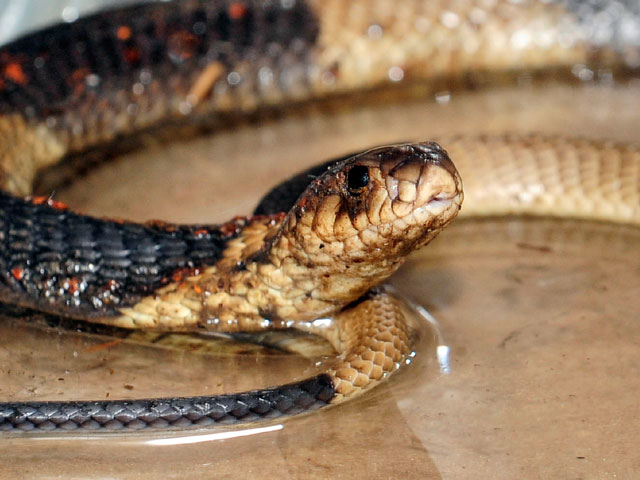 The case of the missing Egyptian cobra has finally been solved. The famous venomous snake has been found just 200 feet from her original location in the Bronx Zoo's Reptile House.

When the young cobra went missing last Friday from the zoo, officials launched an all-out, round-the-clock search. All along, zoo officials predicted they would find the snake in the Reptile House, when she was ready to be found. Thursday morning, the cobra proved them right.

She was found in a non-public area of the Reptile House.

The search team lured the snake by spreading wood shavings that mice and rats use as bedding around the building, hoping the cobra would recognize the scent of rodents and come out of her hiding place for a quick meal.

Bronx Zoo Director Jim Breheny said on "The Early Show" Friday morning the searchers put "all efforts" into recovering the snake when they learned she was missing.

He explained, "We set up the building so we would have clear lines of sight, in different directions, along corridors and places that she would likely be. And we knew it was really important that we allow things to settle down and let her feel comfortable. Because, you know, when she was out of her enclosure, we knew she was going to feel vulnerable. We kind of quieted everything down and waited for her to come out."

"We knew it was kind of a waiting game, and it paid off, because that's how we recovered her."

But how did the snake escape in the first place?

The Reptile House remains closed. Zookeepers plan to do a thorough review of safety procedures and will reopen the exhibit to visitors soon.

He added, "When she was missing, our first responsibility was to our staff and to our guests. Now that we've recovered the animal, we want to make sure she's OK from being at liberty for a week. So we're going to keep her under observation and make sure she's comfortable and she eats. And we probably will reopen the building in about a week."

Co-anchor Chris Wragge joked, "Well, she lives in the Bronx, so she's pretty tough, so she's going to be up to speed pretty quickly, huh?"

The cobra not only survived the ordeal, but became a celebrity, Wragge said.

On Twitter, the snake has a spoof account - BronxZoosCobra - that attracted more than 200,000 followers who viewed her "updates" from around New York City.

Does the zoo plan to capitalize on the snake's unexpected fame?

Breheny said, "Obviously, that certainly wasn't our intent with this whole thing. We were honest and, when we issued the statement, we knew it was going to be news. But we were, I think, taken aback by the sensation of the social media. And you know, although we appreciated everyone's goodwill toward us and support, I mean, we were concentrating on recovering the animal. Because it was a serious situation. And now that we have her, we can kind of take a break and enjoy it a little bit."