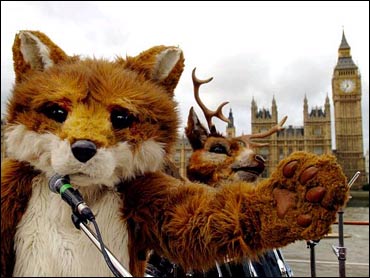 Britain outlawed fox hunting in England and Wales on Thursday as elected legislators won a dramatic standoff with the House of Lords to ban a popular country sport that is despised by many urbanites. The formality of royal assent followed within 45 minutes.

Hunting supporters vowed to defy the ban, which takes affect in three months, and to fight it in court. "True civil disobedience is now on the horizon," said John Jackson, chairman of the pro-hunting Countryside Alliance.

The Commons invoked the rarely used 1949 Parliament Act to force the ban into law despite the opposition of the unelected House of Lords. After the Lords rejected one last compromise gesture, to postpone the effective date until 2006, Speaker of the Commons Michael Martin announced the bill had been passed.

The years-long debate over outlawing a sport opponents see as simply cruel has been highly charged and deeply divisive. Scotland has previously outlawed hunting.

"There are a lot of angry people here, people of all ages and from all backgrounds, who are fed up with being ignored," said Ian Agnew, chairman of the Surrey Union Hunt.

Prime Minister Tony Blair, who had vainly promoted a compromise to regulate hunting, agreed with both sides in predicting that the battle would quickly move to the courts.

While it will still be legal to shoot foxes, the legislation bans all hunting with hounds, including the pursuit of hares and stags.

Before Thursday, the 1949 Parliament Act had been used only three times: to lower the age of consent for homosexual sex, to allow British courts to try Nazis suspected of war crimes and to change the electoral system for selecting representatives to the European Parliament.

The hunting issue sparked an enormous protest in September 2002, when 400,000 hunting supporters marched through central London in what was billed as one of Britain's largest protests in 150 years.

In September, five hunting enthusiasts stormed onto the House of Commons floor as lawmakers debated the ban. Some 10,000 protesters massed outside Parliament that day and some clashed with police in riot gear. Opponents of the ban have vowed to defy it.

Opposition Conservative Party environment spokesman James Gray called the ban proposal a "disgraceful, prejudiced and ignorant little bill" and promised the Tories would repeal it if they win elections expected next year.

Opponents of hunting with hounds say it is unacceptably cruel since the dogs kill foxes by tearing them apart. They also deride it as a mainly aristocratic pastime. Prince Charles and other royals are among the most prominent participants.

Oscar Wilde, mocking the parties of red-jacketed gentlemen who thunder through fields on horseback, once labeled the sport "the unspeakable in full pursuit of the uneatable."

Supporters argue hunting with hounds is humane because the prey die quickly. They say it attracts fans from all walks of life, not just the upper classes, and is central to rural Britain's culture and economy.

They fear a ban would put up to 8,000 people out of work, employees of about 200 hunts as well as saddlers, blacksmiths, grooms and stablehands.

The debate over hunting, which has dragged on for years, has been a political headache for Blair, whose government tried unsuccessfully at the last minute to postpone the ban's start date until 2007.

Lawmakers opted instead for July 2006, but for procedural reasons the standoff between the Commons and the Lords means the ban must takes effect in February 2005.

The backbenchers in Blair's Labour Party, outraged by what they argue is the sport's brutality, were the driving force behind the push to outlaw hunting. Some saw the prime minister's decision to let the legislation go forward as a gesture to party loyalists still angry over his support for the Iraq war and his plans to partly privatize some public services.