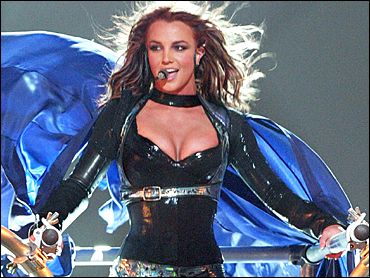 Just a few days ago, word leaked out that Britney Spears was planning to tie the knot again.

Now the pop star is setting the record straight, in an exclusive interview with People magazine, about her engagement and the new gossip on the street that she may be pregnant.

No, she is not pregnant, Spears told People. Cagle says, "I believe her. She will not reveal the wedding date, but she says she wants to have four or five kids. I think a pregnancy is in the future."

Though it has been reported that she me fiance Kevin Federline when he danced for her act, Cagle says the couple actually met in April at a club called Joseph's in Hollywood. About a month after, he went with her to Europe, where she was touring.

"He went with her on this kind of whirlwind romance," Cagle says. They became engaged in the beginning of June when they were flying back to New York from Europe.

Cagle reports, "They got talking on the plane about this and that and suddenly she proposed to him. And he said no. Now, this all is in a span of a couple of minutes. Then he turned around and asked her and she said yes."

When they landed in New York, Spears called friends and family to give them the news and Cagle notes that Spears' mom, Lynne, has been very supportive. Lynne Spears and her son Brian also were part of People magazine's interview.

Cagle says, "Lynne Spears says that the two have, and I quote, 'good karma together.'"

Federline met Lynne Spears when she flew to New York to be with Britney after the knee injury. By then, the couple was already engaged. Spears' knee is still in a brace, and though she was upset to cancel the tour, she said she loves being able to sit around.

About her quickie wedding to Jason Alexander for 55 hours, Britney Spears says she never expected that to become such a big deal.

Spears said Alexander was just a friend and it was a very childish thing that they did. And before the plane ride with Federline, she still felt burned by that whole experience, Cagle notes, "Britney Spears says she was surprised to hear herself talking about marriage again after that. She was burned by it."

In her interview, she said, "I had no idea it would become that big a deal. That thing was a total ugh. I was not in love at all."

But now, with Federline, she believes she's found the one. A week ago, Spears got a rather large ring. And to those who think the couple is going too fast, she said in the interview, "I'm sorry you don't have what I have - I kissed a bunch of frogs and finally found my prince. I feel like I've found my happily ever after."

And Spears says she is looking forward to being a stepmother. Federline has a 2-year-old daughter named Kori and another one on the way with actress Shar Jackson.

"Britney has not met the 2-year-old yet," Cagle says. "Shar Jackson has said she wants Kevin to be part of the kids' lives. I don't know that she's all that happy."

Jackson and Federline were never married.

As for why Spears chose to reveal all this to People magazine, Cagle says, "She has a long relationship with People magazine. The magazine covered her when she was a pop moppet and has been good to her over the years. And she came to us and I think she realized people were wondering what's going on with Britney - the canceled tour and all of that stuff. She came and said, 'I want to give my side of the story.'"

Spears and Federline posed for a picture with her mother, Lynne Spears, and brother Brian. Todd Gold of People magazine did the interview.

Interestingly enough, aside from the interview itself, was how word got out that Spears was doing a photo shoot. While it was happening, there were four helicopters and two dozen paparazzi vans outside. There was a 25-member security detail pulling people out of bushes. When it was over, all these vehicles chased after her. But it didn't faze her at all. She smiled, posed for pictures, she sat in Federline's lap and they kissed, Cagle says.