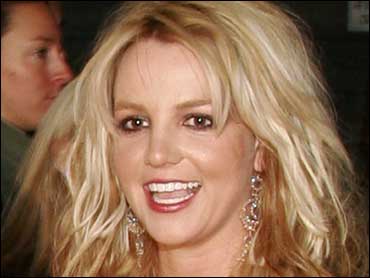 Blame it on love and the paparazzi.

That's Britney Spears' explanation for why she was driving with her infant son on her lap rather than in his car seat.

Several photos published Tuesday showed Spears driving her SUV with her son, Sean Preston, perched on her lap rather than strapped into a car seat in the back seat. Spears said she did it because of a "horrifying, frightful encounter with the paparazzi."

The photos show Spears holding the wheel of the car with one hand, and her 4-month-old baby in the other. A person is shown sitting in the passenger seat next to Spears.

"I was terrified that this time the physically aggressive paparazzi would put both me and my baby in danger," Spears said in a statement released late Monday.

"I instinctively took measures to get my baby and me out of harm's way, but the paparazzi continued to stalk us," she said. "I love my child and would do anything to protect him."

The photos may have captured the attention of the county Department of Children and Family Services, though a spokesman for the agency declined to offer any specifics about the Spears incident.

"We don't say who, what or if we're investigating," department spokesman Stu Riskin said.

Chases by paparazzi inspired a California law, which went into effect Jan. 1. The law holds these aggressive photographers liable for three times the damages they inflict, plus they will lose any payments their published photos might earn. Publishers can also be held liable.

"Unless a deputy saw the violation, there's nothing we can do," Castro said. "We don't even know if this took place in our jurisdiction."

The agency that snapped the photos, X17, said the pictures were taken "in a very peaceful context, in which photographers exhibited no aggressive behavior."

"We believe that the pictures speak for themselves," the agency said in a statement.

Spears gave birth to her son in September. He is her first child with husband of one year, former backup dancer Kevin Federline.

Last month, Access Hollywood reported that photographers who had been tailing Spears and her brother Bryan helped them push their broken down Ferrari off a Los Angeles freeway.

The paparazzi then waited with the pair until police showed up. The Spears siblings were reportedly driven home in the back seat of a police car.