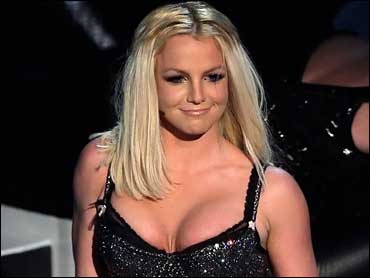 After the performance that may have driven the final nail into the coffin for Britney Spears' career, the once golden "Toxic" singer may make an other stab at a live award show.

Usmagazine.com reports that a source at the Emmys says Fox, the network broadcasting the awards show, is negotiating with Spears about an appearance on the Sunday night telecast.

According to the source, "The idea is to have her come on and apologize for the VMAs. She's weighing the offer," Us reports.

The 25-year-old mother of two was the opening act of the MTV Video Music Awards last Sunday. It was supposed to be a performance that would reinvigorate her career and reintroduce her to the public as a serious artist.

The VMAs were once a place where Spears was sure to shine. In 2003, she shared an infamous kiss with Madonna after performing "Like a Virgin" with her contemporary Christina Aguilera. She captivated the audience with her seductive performance of "Slave 4 U," complete with a giant Python in 2001. In 2000, she let the world know she wasn't a little girl anymore when she ripped off a suit and revealed a barely-there flesh colored get-up.

But this year, she barely moved on stage and seemed to forget the words she was lip-syncing. She performed her latest single of her upcoming album, "Gimme More," which initially had been doing well on the charts. Since the performance it has lost momentum.

Meanwhile, Spears continues to negotiate with her ex-husband Kevin Federline over alimony and custody of their two sons, Sean Preston, 2, and Jayden James, 1
.
Producer Timbaland told MTV that Spears should "humble herself," and perhaps that is what she intends to do. But according to US, a source close to her said nothing is final.

"I can't say this is 100 percent not true," the source said. "All I can say is that the Emmy people aren't dealing with her record company, her manager or her agents at William Morris. So if she is doing anything for the Emmys then it's not going through the official channels."
View CBS News In
CBS News App Open
Chrome Safari Continue