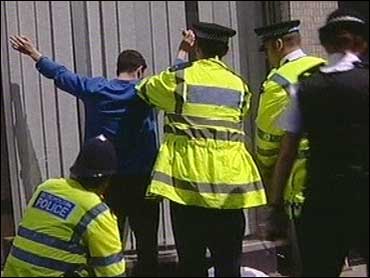 In a chilling but far less bloody replay of the suicide bombings that killed 56 people two weeks ago, small explosions struck the London Underground and a bus at midday Thursday.

Police said two men were arrested and were being questioned. One man was detained near Downing Street, site of the prime minister's residence; the other was picked up near Tottenham Court Road, close to the Warren Street subway station where one attack took place

CBS News Correspondent Richard Roth reports that the man who was arrested on Downing Street was wearing a backpack. Police drew their weapons but found nothing suspicious inside the backpack.

As Roth reports, the explosions were small, suggesting they may have simply been detonators which failed to trigger deadly bombs, but police said the bombers' objective was plain.