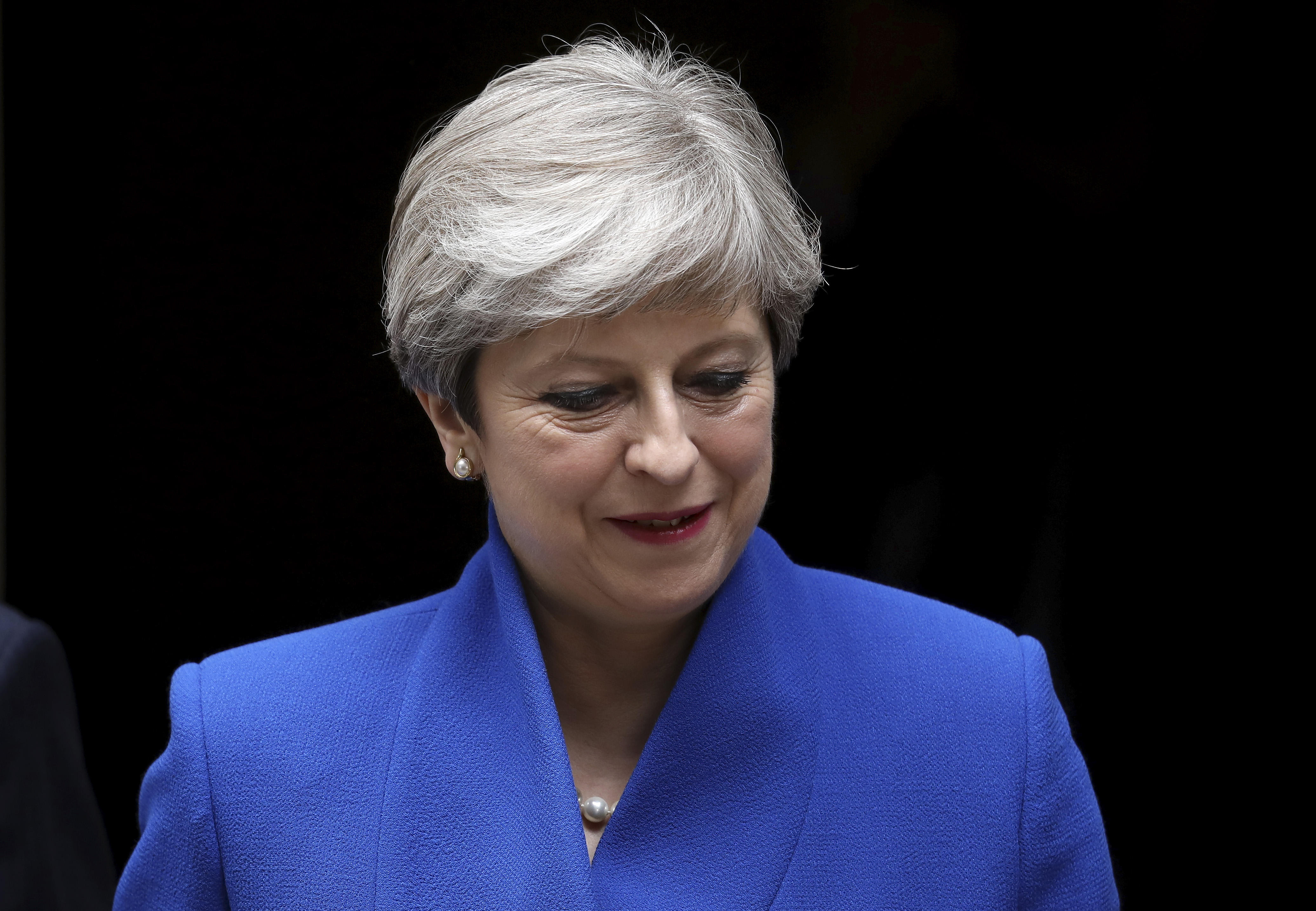 LONDON -- Britain's Conservative Prime Minister Theresa May gambled in calling a national election, thinking she could cruise to a big win.

She appeared early Friday morning looking shaken, chastened and beaten -- odd for somebody whose party won more seats than any other, perhaps, but as CBS News' Mark Phillips reports, the way British politics works, her party's narrow victory amounted to an effective defeat: She lost her majority in Parliament.

Pressure mounted on her to resign, but she refused -- at least for now. Instead,  May visited Queen Elizabeth II and informed her that she would seek to form a coalition government with a much smaller party from Northern Ireland.

The stunning result throws British politics into chaos and could send Britain's negotiations to leave the European Union -- due to start June 19 -- into disarray. The British pound lost more than 2 cents against the dollar in initial trading as results became clear.

Without a majority in Parliament, May's authority is greatly eroded and her Conservative Party will struggle to push through its vision of a "hard Brexit"; one that would see Britain unbound from the key tenets of the EU which require, among other things, a free flow of goods and people across state borders. May's vision of Brexit calls for tariffs on EU goods imported into Britain.

In spite of the dramatic losses for the Conservatives, they remained the party with the most votes, and May made it clear she was not abandoning her post. She said she would form a coalition government with the Democratic Unionist Party of Northern Ireland. Cutting a deal with the DUP could allow May to remain in the Prime Minister's office, albeit with a far weaker mandate.

She insisted, in a statement announcing the effort to form a coaltion with the DUP, that Brexit negotiations would begin as scheduled on June 19 as previously expected.

May vowed to form, "a government that can provide certainty and lead Britain forward at this critical time for our country. This government will guide the country through the crucial Brexit talks that begin in just 10 days and to deliver on the will of the British people by taking the United Kingdom out of the European Union."

Guenther Oettinger, a German member of the European Commission, said earlier Friday that the election result had left it unclear whether negotiations between the U.K. and Europe on Britain's exit from the union could begin that soon.

The EU was hoping for a stable British government to help ensure smooth divorce negotiations ahead of Britain's mandated departure in March 2019.

As CBS News' Phillips reports, May called this snap election while riding a double-digit opinion poll lead. She built her campaign around her leadership, which she called -- over and over again in campaign appearances -- "strong and stable."

But in the weeks leading up to the debate, her opponents labelled her weak and wobbly. She refused to do TV debates, flip-flopped on key policy points, and failed to engage the public in meaningful discussion on the topics of greatest interest, continually falling back on her "strong and stable" mantra.

In the end, any coalition government May manages to pull together could be so weak that another national election is called -- possibly even this year.

The results confounded those who said Labour's left-wing leader, Jeremy Corbyn, was electorally toxic. Written off by many pollsters, Labour surged in the final weeks of the campaign. It drew strong support from young people, who appeared to have turned out to vote in bigger-than-expected numbers. The overall turnout was 68.7 percent -- the highest since 1997.

Corbyn called for May to quit, saying, "The Prime Minister called the election because she wanted a mandate. Well the mandate she's got is lost Conservative seats, lost votes, lost support and lost confidence. I would think that's enough, to go, actually, and make way for a government that will be truly representative of all of the people of this country."

Speaking after being re-elected to his London seat, Corbyn said the election result means "politics has changed" and voters had rejected Conservative austerity.

As she was resoundingly re-elected to her Maidenhead seat in southern England, May looked tense and did not spell out what she planned to do.

"The country needs a period of stability, and whatever the results are the Conservative Party will ensure we fulfil our duty in ensuring that stability," she said.

Many predicted she would soon be gone.

"Clearly, if she's got a worse result than two years ago and is almost unable to form a government, then she, I doubt, will survive in the long term as Conservative Party leader," former Conservative Treasury chief George Osborne said on ITV.

The result was bad news for the Scottish National Party, which lost about 20 of its 54 seats. Among the casualties was Alex Salmond, a former first minister of Scotland and one of the party's highest-profile lawmakers.

The losses complicate the SNP's plans to push for a new referendum on Scottish independence as Britain prepares to leave the EU. Scottish Conservative leader Ruth Davidson said the idea of a new independence referendum "is dead. That's what we have seen tonight."

May had hoped the election would focus on Brexit, but that never happened, as both the Conservatives and Labour said they would respect voters' wishes and go through with the divorce.

May, who went into the election with a reputation for quiet competence, was criticized for a lackluster campaigning style and for a plan to force elderly people to pay more for their care, a proposal her opponents dubbed the "dementia tax." As the polls suggested a tightening race, pollsters spoke less often of a landslide and raised the possibility that May's majority would be eroded.

Then, attacks that killed 30 people in Manchester and London twice brought the campaign to a halt, sent a wave of anxiety through Britain and forced May to defend the government's record on fighting terrorism. Corbyn accused the Conservatives of undermining Britain's security by cutting the number of police on the streets.

Eight people were killed near London Bridge on Saturday when three men drove a van into pedestrians and then stabbed revelers in an area filled with bars and restaurants. Two weeks earlier, a suicide bomber killed 22 people as they were leaving an Ariana Grande concert in Manchester.

Rachel Sheard, who cast her vote near the site of the London Bridge attack, said the election certainly wasn't about Brexit.

"I don't think that's in the hearts and minds of Londoners at the minute, (not) nearly as much as security is," said Sheard, 22. "It was very scary on Saturday."

Steven Fielding, a professor of politics at the University of Nottingham, said Britain had seen an election "in which the personal authority of a party leader has disappeared in an unprecedented way."

"If she had got the majority she wanted, she would have been a supreme political colossus," he said. "She did not get that and she's a hugely diminished figure. She's a zombie prime minister."