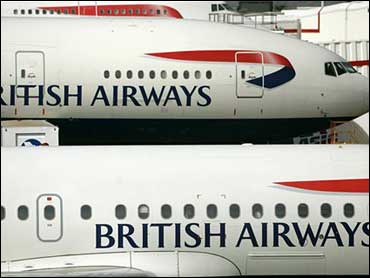 British Airways was fined almost $550 million on Wednesday by U.S. and British regulators after the airline acknowledged colluding with rival Virgin Atlantic over fuel surcharges.

The carrier was fined $246 million by Britain's Office of Fair Trading and $300 million by the U.S. Department of Justice after parallel trans-Atlantic investigations.

In May, British Airways PLC set aside $710 million in preparation for such penalties from regulators.

In a statement, the airline said that between August 2004 and January 2006 it colluded with Virgin Atlantic over the surcharges added to fares in response to rising oil prices. Under the Office of Fair Trading's leniency policy, Virgin Atlantic is not expected to face a fine because it reported the alleged misconduct to authorities.

British Airways Chief Executive Willie Walsh said passengers had not been overcharged. He said a "limited number of individuals" in the company had broken competition rules.

"Anticompetitive behavior is entirely unacceptable and we condemn it unreservedly," he said.

Authorities in Britain and the United States have been investigating allegations of price-fixing on fuel surcharges since June 2006. A criminal investigation is ongoing.

During the period under investigation, fuel surcharges rose from about 5 pounds ($10) to about 60 pounds ($120) per ticket for a round-trip long-haul flight on British Airways and Virgin.

OFT Chairman Philip Collins said the fine — the largest ever imposed by Britain's competition watchdog — "will send an important message to corporate boards and business leaders about our intention to enforce the law, and serves to remind companies of the substantial risks involved if they are found to engage in such behavior."

The office found that British Airways and Virgin discussed fuel surcharges on at least six occasions over the year and a half to January 2006. Soon after that, Virgin went to the authorities.

In a statement, Virgin said it had informed regulators "as soon as our legal team was made aware of the nature of contacts that had occurred between some individuals at British Airways and Virgin Atlantic."

Deborah Jones, deputy director of cartel investigation at the Office of Fair Trading, said it was just to treat Virgin differently because it had come forward first. She said that did not mean Virgin would not be penalized.

"Virgin are still facing the censure, the publicity that they have engaged in this behavior," she said. "They are not immune from customers who may seek some form of compensation."