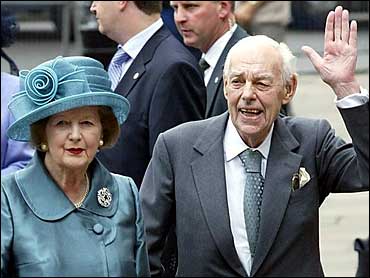 Sir Denis Thatcher, the husband of former Prime Minister Margaret Thatcher, died Thursday at the age of 88, a spokesman for the family said.

Thatcher, who underwent coronary bypass surgery in January and had been hospitalized for several weeks, died at London's Lister Hospital.

A tall, well-dressed and wealthy man who was always a step behind his famous wife during her years in power from 1979 to 1990, Thatcher learned to turn the self-effacing remark into a high art. He once described himself as the most "shadowy husband of all time."

Lady Thatcher, 77, suffered a series of small strokes last year that forced her to give up most public speaking engagements.

Before that, she cited her husband's poor health in turning down an invitation to visit the Falkland Islands to mark the 20th anniversary of the 1982 war between Britain and Argentina.

At the age of 80, Denis Thatcher looked back on his marriage and mused, "All I could produce, small as it may be, was love and loyalty."

To his wife, he was the bedrock; the provider of nannies and expensive boarding schools for their two children; and the love story that made the rest possible.

"I think people adore him — and I do too," she once said.

"He wasn't only a supportive husband; Mr. Thatcher was a silent husband — far too smart to disagree in public with anything his powerful wife said or did," said CBS News Correspondent Dan Raviv, stationed in London for many of the Thatcher years.

Thatcher was 64 and a retired oil executive when his wife led Britain's Conservative Party to victory and became Europe's first female prime minister in May 1979.

He remained by her side through two more national elections, through the 1982 Falkland Islands War, a 1984 assassination attempt and extensive foreign travel.

He was there, sweating profusely with a large pink turban wobbling on his head during a trip to India.

He chatted with the wives of other leaders at summit meetings. He got pushed around, often unrecognized, by crowds mobbing his wife on walking tours from Moscow to English regional cities.

"In private, he was like most British businessmen — interested in finance, sports, and a quiet drink in the evening," said Raviv. "It was always amusing to see him socializing with the first ladies, such as Nancy Reagan, when foreign leaders visited Britain."

He was still there, waving briskly beside his tearful spouse, as they left the prime minister's 10 Downing St. residence in November 1990 after she was ousted in a party revolt.

A month later he was made a hereditary baronet, a title of nobility.

At times, Thatcher seemed to join in caricaturing himself. Asked the secret of his trim figure, he said: "gin and cigarettes."

After the Irish Republican Army blew up the prime minister's hotel during the Conservatives' 1984 party convention in Brighton, wrecking part of the Thatchers' suite and killing five people, Denis Thatcher responded with an English stiff-upper-lip classic.

"It was quite a thump," he said. "You should have seen the bathroom."

Born into an upper-middle class family, Thatcher took over his grandfather's paint and chemicals company, Atlas Preservatives, after World War II service as an army officer. His wartime first marriage had ended in divorce.

He met 25-year-old Margaret Roberts in 1950 at a Conservative Party function. They married a year later and their twins, Mark and Carol, were born in 1953.

Thatcher sold the family company in 1965 to Burmah Oil, but remained in the business until he retired and was also on the boards of several companies.

He is survived by his wife, his daughter Carol, son Mark and two grandchildren. Funeral arrangements were not immediately announced.