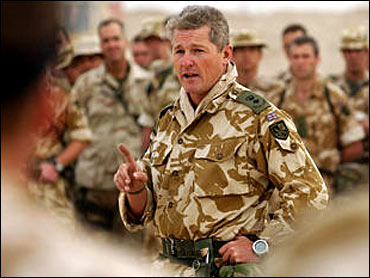 A senior British Army officer is being investigated for alleged war crimes during the Iraq conflict, defense sources said Wednesday.

The sources said the charges against Lt. Col. Tim Collins, the officer who made headlines on the eve of battle with a stirring speech to his regiment, were made by U.S. troops attached to his 1st Battalion of the Royal Irish Rangers.

The Ministry of Defense confirmed that there was an investigation into an officer serving in Iraq, but declined to comment further.

The British Broadcasting Corp. Web site reported that Collins, who is on leave as he awaits a new army posting, said Wednesday that he was confident his reputation would be upheld. Collins made no other public statement.

The defense sources said that the army's Special Investigations Branch is probing allegations that Collins' treatment of prisoners of war and an Iraqi civic leader might have broken the Geneva Convention.

The Sun newspaper said charges against Collins include accusations that he punched, kicked and threatened prisoners to get information, that he fired shots at the ground near the feet of Iraqi civilians to intimidate them, and that he allegedly hit a civic leader with the butt of a pistol.

The Evening Standard newspaper said the complaints were made by U.S. reservists who came under Collins' command in Iraq. The newspaper quoted unidentified witnesses who said the American soldiers were angry about the severe discipline imposed on them by Collins, who is known for his blunt and direct leadership style.

Col. Bob Stewart, the former commander of British forces in Bosnia, said an investigation was appropriate to keep the army beyond reproach but said there were situations in war that could be interpreted in different ways.

Stewart described slapping a hysterical woman during the conflict in Northern Ireland.

"I hated myself for doing it but it was the only way that I could get her under control. I do not think it was a war crime. I did it deliberately and I did it to get the situation under control," he said. "I can readily see situations where people do things that can be cut any way you like."

Collins, 43, who was often seen with a cigar clenched between his teeth and wearing sunglasses, galvanized his 600-strong regiment in Kuwait with a rallying cry in which he urged them to do their duty while treating the enemy with respect.

"Wipe them out if that is what they choose. But if you are ferocious in battle remember to be magnanimous in victory," he said.

"…If you harm the regiment or its history by over-enthusiasm in killing or in cowardice, know it is your family who will suffer. You will be shunned unless your conduct is of the highest."

Prince Charles was so impressed by the speech that he wrote a personal note to Collins to say how "profoundly moved" he was by the "extraordinarily stirring, civilized and humane" words.

President Bush was reported to have a copy of the speech at the Oval Office.
Collins, a father of five, is in line for a gallantry medal for his service in Iraq and has also been selected for promotion to full Colonel.

The Royal Irish soldiers took control of a vast area of southern Iraq, stretching across 4,500 square kilometers, during the conflict. They were responsible for patrolling and securing the zone and also seized major stocks of weapons and ammunition.

The U.S. and British forces who participated in the war in Iraq took some 7,000 prisoners. About half have been repatriated.

The United States took issue with the way Iraqis treated Americans whom they took captive. The major objection was to the airing of film of captured soldiers, in which they were interrogated. In addition, Iraq apparently never permitted Red Cross officials from meeting with their captives, as required by international law.

Article 13 of the Geneva Convention on Treatment of Prisoners of War states that POWs "must at all times be humanely treated. Any unlawful act or omission by the Detaining Power causing death or seriously endangering the health of a prisoner of war in its custody is prohibited."

"Prisoners of war must at all times be protected, particularly against acts of violence or intimidation and against insults and public curiosity," it continues. "Measures of reprisal against prisoners of war are prohibited."

Several Iraqi civilians sued him in a Belgian court for crimes allegedly committed during the war, such as the use of cluster bombs and shooting at ambulances. A court this week sent the case to U.S. courts.