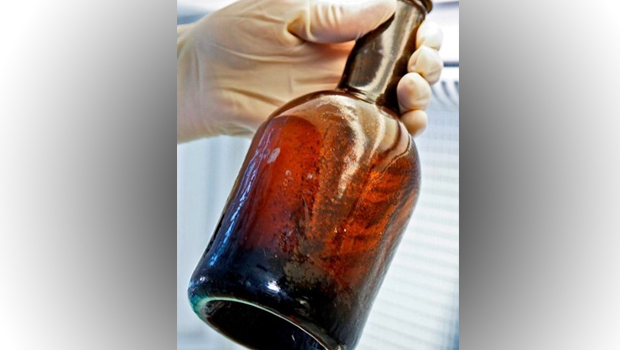 When you're picking out a beer, what flavors do you look for? If hints of soured milk and burnt rubber, or a "goaty" taste sound delightful to you, then brews that were aged for 170 years at the bottom of the Baltic Sea might just be your thing.

Scientists recently opened two bottles of beer from a shipwreck off the coast of Finland to get a profile of the 19th century brews.

Some seawater had seeped into the bottles and decades of bacterial activity gave the beer some rather unpleasant notes. But enough compounds from the drinks survived that the researchers were able to tell that the beers' original flavors probably would have been quite similar to those of modern beers, according to a new report. [In Photos: Baltic Sea Shipwreck Yields 200-Year-Old Seltzer Bottle]

The bottles came from 165 feet (50 meters) below the surface of the Baltic, from the wreckage of a schooner that sank near Finland's Aland Islands in the 1840s. In 2010, divers found 150 bottles of champagne at the wreck, as well as five beer bottles, though one did not survive the journey back to land. When that bottle broke in the divers' boat, it started to foam, and some gastronomically adventurous divers attested that the liquid indeed tasted like beer, according to the study authors, who published their findings in the Journal of Agricultural & Food Chemistry last month.

For a more scientific examination of the beers' flavor, the research team, led by John Londesborough of the Technical Research Center of Finland (VTT), uncorked two of the surviving bottles. The researchers were hit with a ripe mixture of smells: yeast extract, dimethyl sulfide (think cabbage), Bakelite (a fishy smelling retro plastic), burnt rubber, over-ripe cheese, goat and sulfur. These unsavory notes were likely the result of bacteria growing inside the bottles for decades, overpowering whatever fruity, malt or hop profiles the beer originally had, the researchers wrote.

The beers were also "bright golden yellow, with little haze," and they may have been diluted by seawater by up to 30 percent, the researchers said. So the drinks might have been stronger than their current alcohol-by-volume levels of 2.8 to 3.2 percent.

The scientists acknowledged that the beer had not been stored in ideal conditions, and there is little data on the chemical stability of beer over such a long time. Just from sipping the old beer, the researchers couldn't tell what the drinks may have originally tasted like. Yet, from their chemical analyses, they could speculate a few things.

They found that yeast-derived flavor compounds were similar to those of modern beers. They also think the two bottles contained different beers, with one being hoppier (and thus more bitter) than the other. The less hoppy beer had a higher than normal amount of a chemical called phenylethanol, which may have given it roselike notes. There were unusually low levels of 3-methylbutyl acetate (a compound that gives beer notes of banana) in both bottles, but it's possible that the chemical's concentration plummeted over such a long period of aging, the researchers wrote.