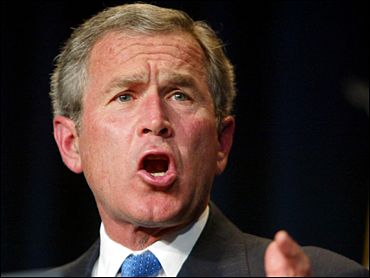 Three words directed by President Bush to fighters attacking Americans in Iraq have triggered attacks of a different kind — from those critical of the president's approach to foreign affairs.

Answering press questions on Wednesday about the violence in which 26 Americans have died since major combat in Iraq ended more than a month ago, the president vowed to find and punish "anybody who wants to harm American troops," and said the attacks would not weaken his resolve to restore peace and order in Iraq.

"There are some who feel like that the conditions are such that they can attack us there. My answer is bring them on," Mr. Bush said.

At least, that's what he said according to the official White House transcript. But reporters say the phrase actually sounded like "bring 'em on."

Either way, the tone rubbed some Democrats and foreign commentators the wrong way.

"I am shaking my head in disbelief," Lautenberg said. "When I served in the Army in Europe during World War II, I never heard any military commander — let alone the commander in chief — invite enemies to attack U.S. troops."

Britain's anti-war Guardian newspaper dubbed the statement a "gesture of presidential bravado." It did not help, in critics' eyes, that the president made the statement with a picture of Teddy Roosevelt on a rearing horse — a cowboy image some people overseas associate with the current president.

White House spokesman Ari Fleischer said Mr. Bush's combative tone was not meant to invite attacks on Americans. "I think what the president was expressing there is his confidence in the men and women of the military to handle the military mission they still remain in the middle of," Fleischer said.

According to Lautenberg, one third of U.S. casualties in Iraq have occurred since Mr. Bush declared major combat over two months ago.

On Tuesday, assailants traveling in a vehicle in central Baghdad fired a rocket-propelled grenade at a U.S. military vehicle, wounding three soldiers. Another grenade slammed into a U.S. truck on a road south of Baghdad, injuring three soldiers, one of whom died at a field hospital overnight.

Mr. Bush expressed impatience with the criticism leveled at his administration in recent weeks.

"See, we've been there for, what — I mean, how many days?" the president said. "Frankly, it wasn't all that long ago that we started military operations. And we got rid of him, much faster than a lot of people thought."

The president often uses robust language when describing or addressing America's enemies. On several occasions this year he referred implicitly to the killings of al Qaeda operatives by saying that some had been arrested or "otherwise dealt with," often to knowing chuckles from friendly crowds.