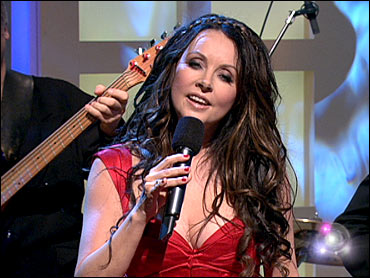 Sarah Brightman became an international star during her run as the leading lady in the original cast of "Phantom of the Opera."

Over her 30-year career, the soprano has sold more than 26 million albums and created her own genre of music, commonly referred to as "pop opera."

In "Symphony," her first collection of new material in five years, the Berkhamsted, England native
reunites with Andrea Bocelli, and collaborates in other tracks with Spanish countertenor Fernando Lima, Italian tenor Alessandro Safina, and rock superstar Paul Stanley, of KISS.

Why was "Symphony" so long in the making?

"Well," Brightman told Early Show co-anchor Julie Chen, "I took my time because I wanted to make something really different and really good. So it took that time to make it.

"And it's wonderful, because it's got a lot of dark and light in it. It's quite Gothy and rocky. On the other hand, it's quite operatic, as well. So, you've got the feeling of all styles, so it's great."

"Andrea (Bocelli)'s wonderful to work with," Brightman observed. "It's wonderful, because our voices blend really well together. It's a successful formula.

With Paul (Stanley), he was amazing. And I had this sort of quite dark song with sort of operatic tendencies in it. And I just thought he would be great for this, and asked him, and he really wanted to do it, so that was it!"

"So," Brightman continued, "there was always a connection between that and the rock thing and opera thing, which is great."

Brightman starts a world tour in the U.S. in the fall.