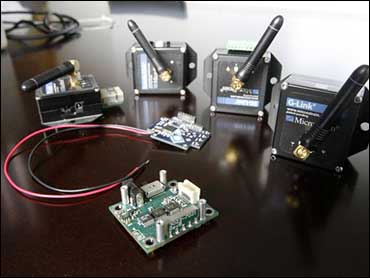 A company that designed sensors that can be implanted in the human body to measure strain on knee ligaments is experimenting with adapting the technology for use in assessing the conditions of bridges.

In the wake of the Minneapolis bridge collapse two weeks ago, Steve Arms and his company, MicroStrain Inc., are experimenting with wireless sensing technology that can provide data on strain, seismic activity and vibrations on bridges, eliminating the need to manually replace batteries once the sensors are installed in hard-to-access places.

Already in place on the Corinth Canal Bridge in Greece and an Interstate 95 bridge in New London, Connecticut, the sensors harvest energy from the sun using 6-by-9-inch photovoltaic panels. The panels are linked to rechargeable batteries and power microelectronic modules that record data from inside watertight enclosures. The data is transmitted to computers via wireless connections.

The devices can be used for short-term monitoring — identifying problem spots — or on a permanent basis, as in the case of the Greek span, which is prone to seismic activity.

"There are a handful of technologies that are promising to take the field of bridge engineering from where it is to a different plateau, and one of them is wireless sensing," said Drexel University engineering professor A. Emin Aktan. The specialist in bridge and infrastructure monitoring has used MicroStrain's products in research for the Federal Highway Administration.

"Wireless sensing really is a major leapfrog over cabled standard classical types of sensing. You save maybe 60 to 70 percent of the labor, the costs and trouble," Aktan said.

Based in an office park near Burlington, MicroStrain — founded in 1986 — has about 30 employees and sales that topped $5 million last year. The company exports nearly half of its products, many of them for use in automotive applications. Among its clients: General Motors Corp., Ford Motor Co., Caterpillar Inc. and the U.S. Navy.

Last month, the company won a pair of Navy contracts for a stress detection system for high-performance aircraft. Gauges are attached to critical stress points inside the aircraft, with data collected from the sensors helping maintenance crews determine stress levels and respond accordingly.

"What we're good at is combining processors with sensors, to give those sensors the ability to do things they otherwise wouldn't be able to do, like record data, use energy in an intelligent manner, change their operating modes as appropriate for the application," said Arms, president of MicroStrain.

"Basically, to be programable," he said.

The Greek bridge was outfitted with the solar-powered version last November.

Installation of the devices on the Goldstar Bridge, which carries Interstate 95 over the Thames River, was completed earlier this month. They cost $10,000 to $30,000, depending on the number and type of nodes used.

It remains to be seen whether the technology will get widespread use.

"It looks promising, but it does require effort, dedication and maybe another year or so before we can have a system we can say `Five states can take this and adopt it and implement it,"' Aktan said.

Arms says it is premature to suggest that monitoring devices could help prevent collapses like the one in Minneapolis, but if the cause turns out to have been structural, sensors could be deployed on other similarly designed bridges to help authorities monitor their health.

John DeWolf, who is overseeing a research project that includes the solar-powered sensors on the Goldstar Bridge, said the devices fill a need.

"It greatly expands what we can do with monitoring," said DeWolf, a professor of civil and environmental engineering at the University of Connecticut. "You can put sensors where you cannot get at them readily. You no longer have to run a wire to them, or change batteries. It's very exciting."