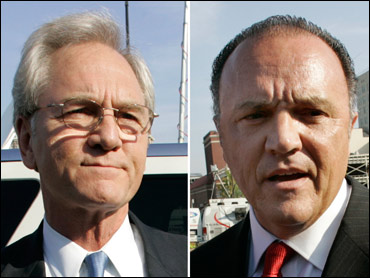 A three-judge panel of the 11th U.S. Circuit Court of Appeals in Atlanta struck down two of the seven charges that Siegelman was convicted of and ordered a new sentencing hearing. That means Siegelman's seven-year sentence could be reduced.

Siegelman, 63, and Scrushy, 56, were convicted in 2006 by a federal court jury in Montgomery, where Siegelman was a prominent Democrat with a political career dating back three decades.

Siegelman has claimed his prosecution was pushed by Republicans, including former White House adviser Karl Rove, a claim career federal prosecutors who handled the case have emphatically denied. Rove, a Texas strategist, was once heavily involved in Alabama politics.

Prosecutors argued that Siegelman appointed Scrushy to the influential board in exchange for Scrushy arranging $500,000 in contributions to the governor's campaign for a state lottery in 1999.

Siegelman also was convicted on a single obstruction of justice count linked to the purchase of a motorcycle with the help of a lobbyist.

The former governor was released from prison last year, six weeks after a 60 Minutes story cast doubt about the prosecution's evidence and motives.

Watch the full 60 Minutes piece, which originally aired in February, 2008.

But the courts ruled the wealthy Scrushy, who turned Birmingham-based HealthSouth into one of the nation's biggest rehabilitation chains, was a flight risk.

The appeals court judges, in a unanimous decision, rejected a key defense argument that prosecutors failed to prove there was an explicit "quid pro quo" agreement between Siegelman and Scrushy, which is required in federal bribery cases. The defense also argued that U.S. District Judge Mark Fuller did not adequately instruct jurors that such an agreement was necessary.

In a 68-page opinion, the panel said that the instructions Fuller gave jurors was sufficient. The judges also rejected defense arguments of juror misconduct involving a claim that some jurors exchanged e-mails and were subjected to outside influences during jury deliberations.

"We conclude that the district court did not abuse its discretion in holding that there was nor reasonable possibility of prejudice to the defendants arising out of the exposure of the jury to this extrinsic evidence," the judges wrote.

The judges also threw out defense arguments that the indictments against Siegelman and Scrushy came after the five-year statute of limitations in bribery cases had expired. The judges said they waived their right to make that claim by not raising the argument until after the trial.