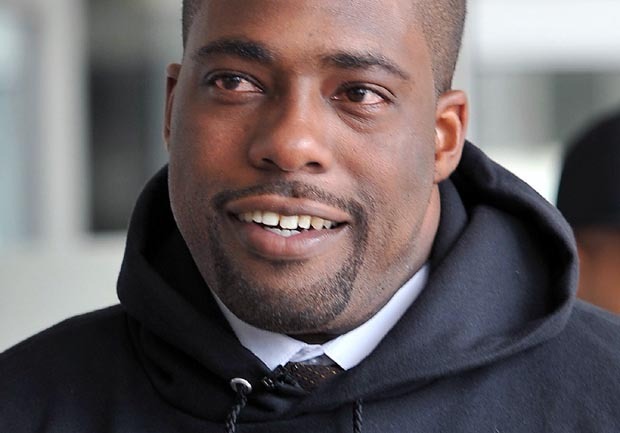 (CBS News) Brian Banks' pro football ambitions were cut short by a false accusation that left him in prison.

Now he's signed with a the Las Vegas Locomotives of the United Football League.

At 26, most professional football players are well into their careers. But Brian Banks is just beginning his. "It is definitely a new life," Banks told CBS News. "But it's good."

And that life took a dramatic turn just four months ago.

It was May 24 in a downtown Los Angeles courtroom when Banks was exonerated for a rape his alleged victim admitted never happened. Banks was a 16-year-old star middle linebacker with a full-ride scholarship waiting for him at the University of Southern California in 2002 when he was accused. He spent the next five years in prison - and another four years as a registered sex offender with a tracking bracelet around his ankle. Then his alleged victim admitted the rape never happened.

Through it all, Banks' drive to play pro football never faltered. Asked how he would describe his whirlwind experience, he laughed and said, "Nonstop, just nonstop in pursuit of the dream."

With no offers after trying out with several National Football League teams, Banks decided to sign with the Locomotives of the UFL, a league where players have all the heart and a fraction of the paycheck of their NFL counterparts.

Banks said of his fellow players, "Whether I'm playing alongside of them, behind them coming in off the sideline, I'm ecstatic. And I'm humbled by the whole experience."

Former New York Giants coach Jim Fassel is head coach for the Locomotives. Asked what he saw in Banks' play, Fassel said he said he saw an athlete. He said, "I'll tell you what, he made a couple of calls to adjust the defense. So I'm going, 'This is the first day out here, man, he's just learning this stuff.' And I was impressed with that."

Wearing a T-shirt that spells out "exonerate," Banks spends his time off the field helping secure the release of other convicts who say they, too, are innocent.

Banks said, "A big part of me is a part that wants to give back to the California Innocence Project and people who have been wrongfully convicted of crimes that they didn't commit."

The next big milestone will come Wednesday night, when the Las Vegas Locomotives host the Virginia Destroyers in the opening game of this UFL season. Banks will have an opportunity to fulfill a dream he's had ever since he was 16 years old - to step out onto a football field as a professional football player. It's may not be the NFL, but for Banks, it's a dream come true.

"I'm just thankful for everything that's taken place," Banks said. Asked what he's learned about himself, Banks replied, "That I'm never gonna quit. That my persistence is unyielding. That no matter what I go through in life, I accept the path that God put before me."

To watch CBS News Los Angeles reporter Randy Paige's full report, click on the video in the player above.