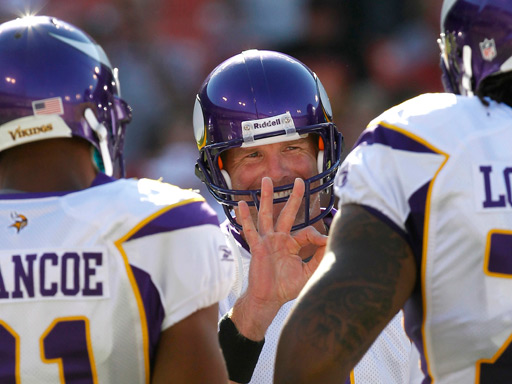 Brett Favre, whose Minnesota Vikings came up short in their season opener against the Super Bowl champion New Orleans Saints last night, has been distributing more than just the football: According to the Center for Responsive Politics, Favre and his wife Deanna gave $4,800 toward the 2010 re-election campaign of Rep. Gene Taylor, a Mississippi Democrat.

As the Associated Press notes, the Favres have a home near Hattiesburg, which is in Taylor's district, and Brett Favre grew up in the town of Kiln, which is also in the district.

Favre is one of 46 National Football League "players, owners, executives, associates or recent retirees" who donated to $3,000 or more to candidates or committees in this election cycle, according to the Center for Responsive Politics.

NFL Commissioner Roger Goodell, meanwhile, spread his money around to both parties. And the NFL's Political Action Committee has donated nearly $500,000 through June, including a contribution to Democratic Rep. Heath Shuler of North Carolina, the former quarterback.