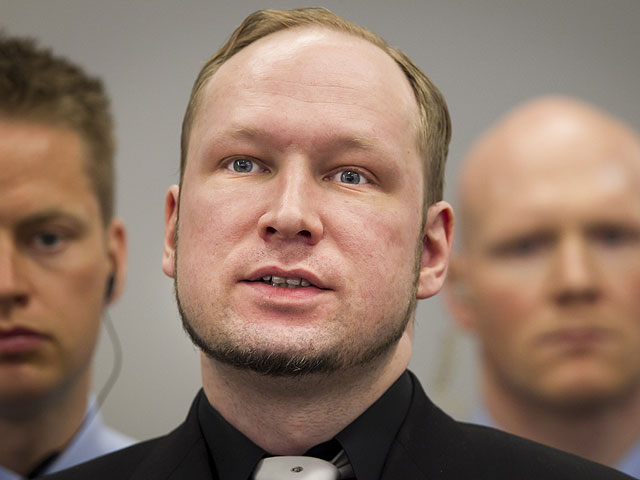 (AP) OSLO, Norway - In testimony too graphic for any parent to hear, Norwegian far-right extremist Anders Behring Breivik shocked an Oslo courtroom Friday as he calmly described hunting down teenagers on an island summer camp.

As his words rolled out, survivors and victims' relatives of the July 22 massacre hugged and sobbed, trying to comfort each other. That testimony was also broadcast to 17 other courtrooms in Norway where others affected by the attacks were gathered, but was not carried live on Norwegian television.

The 33-year-old Norwegian left out no detail from his rampage, explaining how he shot panicked youths at point-blank range. Sixty-nine people, mostly teenagers, were killed on Utoya island and others only survived by diving into chilly waters to escape.

Breivik said he did not anticipate his victims' reactions.

"Some of them are completely paralyzed. They cannot run. They stand totally still. This is something they never show on TV," Breivik said. "It was very strange."

Breivik has admitted to setting off a bomb July 22 in Oslo, killing eight people, before opening fire to the governing Labor Party's annual youth camp on Utoya island. But he has pleaded not guilty to criminal charges, saying his victims had betrayed Norway by embracing immigration.

The main goal of the trial, now in its fifth day, is to figure out whether Breivik was sane or insane — two official reports have come to opposite conclusions on that point.

Looking tense but focused, Breivik spoke calmly about the shooting rampage, beginning with the moment he took a small ferry to Utoya, an island in a lake outside Oslo. He was disguised as a policeman, carrying a rifle and a handgun. He also brought drinking water because he knew he would get a dry throat from the stress of killing people.

"My whole body tried to revolt when I took the weapon in my hand. There were 100 voices in may head saying 'Don't do it, don't do it,"' Breivik said.

He said he pointed his gun at Berntsen's head and pulled the trigger. He shot Boesei as she tried run away. Then as they lay on the ground, he shot them both twice in the head.

The first shot was "extremely difficult," he declared, saying he then entered a "fight-and-flight modus" that made it easier to continue the killing spree.

Breivik said he couldn't remember large chunks of the approximately 90 minutes he spent on the island before surrendering to police commandos. Still, he recalled some of the shootings in great detail, including inside a cafe where he mowed down young victims as they pleaded for their lives.

Some teenagers were frozen in panic, unable to move even when Breivik ran out of ammunition. He changed clips. They didn't move. He shot them in the head.

Others pretended to be dead. He said he shot them, too.

Breivik continued his rampage around the island, luring youth from their hiding places by telling them he was a police officer who was there to protect them. When they came out, he gunned them down.

He said his goal was to kill all of the nearly 600 people on the island. He said he had thought about wearing a swastika on his chest as a pure fear factor, but decided against it because he didn't want people to think he was a Nazi.

"'You will die today Marxists,' I yelled," Breivik recalled.

His testimony was physically revolting. Inside the Oslo court, a man who lost his son on the island closed his eyes hard, squeezing them shut. Another man to his left put a comforting hand to his shoulder. A woman to his right clutched onto him, resting her forehead against his arm.

Breivik said he was deliberately using "technical" language as a way to keep his composure.

"These are gruesome acts, barbaric acts," he said. "If I had tried to use a more normal language I don't think I would have been able to talk about it at all."

Earlier, Breivik said he took to the Internet to learn how to carry out his bombing-and-shooting rampage, studying attacks by al Qaeda, Oklahoma City bomber Timothy McVeigh and the 1993 bombing of the World Trade Center.

The confessed mass killer told the court he paid close attention in particular to the World Trade Center bombing in New York and McVeigh's 1995 attack on an Oklahoma City government building, which killed 168 people and injured over 600.

Breivik also said he had read more than 600 bomb-making guides.

He called the Islamist al Qaeda "the most successful revolutionary movement in the world" and said it should serve as an inspiration to far-right militants, even though their goals are different.

Comparing himself to a Japanese "banzai" warrior during World War II, Breivik said too many Norwegian men were "feminized, cooking food and showing emotions."

A lawyer for the victims noted that Breivik himself had cried on the first day of the trial as prosecutors showed an anti-Muslim video he had created.

"I wasn't prepared for that film," Breivik said. "It's a film that represents the fight and everything I love."

Breivik has admitted to the bombing in Oslo that killed eight people and the shooting massacre at the Labor Party youth camp that left 69 dead. He claims to belong to an alleged anti-Muslim "Knights Templar" network. Many groups claim part of that name, but prosecutors say they don't believe the group described by Breivik exists.

If declared sane, Breivik could face a maximum 21-year prison sentence or an alternate custody arrangement that would keep him locked up as long as he is considered a menace to society. If found insane, he would be committed to psychiatric care for as long as he's considered ill.

Christin Bjelland, a spokeswoman for a massacre support group, was horrified by Breivik's testimony.