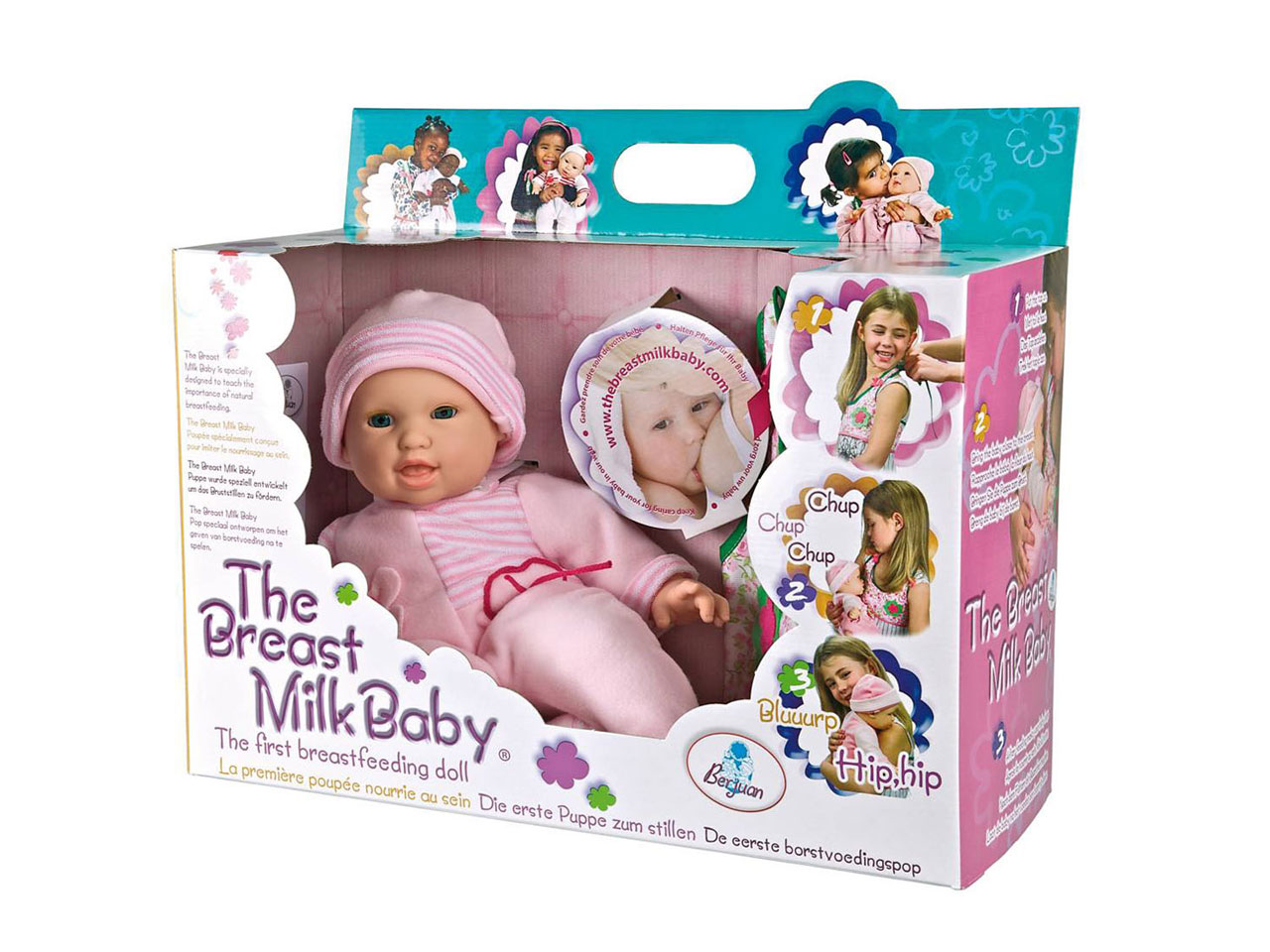 But it's a breast-feeding doll whose suckling sounds are prompted by sensors sewn into a halter top at the nipples of little girls that caught some flak after hitting the U.S. market.

"I just want the kids to be kids," Bill O'Reilly said on his Fox News show when he learned of the Breast Milk Baby. "And this kind of stuff. We don't need this."

What, exactly, we don't need is unclear to Dennis Lewis, the U.S. representative for Berjuan Toys, a family-owned, 40-year-old doll maker in Spain that can't get the dolls onto mainstream shelves more than a year after introducing the line in this country - and blowing O'Reilly's mind.

"We've had a lot of support from lots of breast-feeding organizations, lots of mothers, lots of educators," said Lewis, in Orlando, Florida. "There also has been a lot of blowback from people who maybe haven't thought to think about really why the doll is there and what its purpose is. Usually they are people that either have problems with breast-feeding in general, or they see it as something sexual."

The dolls, eight in all with a variety of skin tones and facial features, look like many others, until children don the little top with petal appliques at the nipples. That's where the sensors are located, setting off the suckling noise when the doll's mouth makes contact. It also burps and cries, but those sounds don't require contact at the breast.

Little Savannah and Tony, Cameron and Jessica, Lilyang and Jeremiah aren't cheap at $89 a pop. Lewis, after unsuccessfully peddling them to retailers large and small, now has them listed at half price on their website in time for the holidays this year.

"With retailers it's been hard, to be perfectly honest, but not so much because they've been against the products," he said. "It's more they've been very wary of the controversy. It's a product that you either love it or you hate it."

"We felt that it had merit in dealing with new babies for the older child," she said, "and for the curiosity that children have in this area. Breast-feeding in Europe is acceptable and the doll has been successful there. We wanted to open up the opportunity."

"I think it's a very cute toy," she said. "I think it's just crazy what Bill O'Reilly was saying that it's sexualizing little girls. The whole point is that so many people in our society persist in sexualizing breast-feeding, where in so many other countries around the world they don't think anything of it."

Olds called Americans "prudish in many ways," adding the doll offers: "bodily awareness. It's realizing that this is OK."

Lewis blames lack of U.S. sales - just under 5,000 dolls sold in the last year - solely on phobia about breast-feeding, something widely considered the healthiest way to feed a baby.

"There's no doubt about that," he said. "The whole idea is that there's still some taboos here. They're difficult to justify and difficult to explain but they're out there. You mention breast and people automatically start thinking Janet Jackson or wardrobe malfunctions and all sorts of things that have absolutely nothing to do with breast-feeding."

Olds, who lives in New York City, agreed, though she thinks the doll's full retail price is too high. "That's my only objection to it. It's a lot of money, but people spend a lot of money on their children in all sorts of ways."

Haven't little girls been mimicking the act of breast-feeding with their baby dolls for centuries without benefit of accoutrement?

"Why do we need anything with bells and whistles? Why did we need a Betsy Wetsy? Children like toys that do things," Olds said, invoking one of the first drink and wet dolls created back in 1935. "So this doll makes noises. She burps, she cries, she sucks very noisily. Big deal."

Lincoln Hoppe, a Los Angeles actor and father of five - all breast-fed - said a young child who becomes a big sibling and sees mom nursing might enjoy the doll just fine. "After all, they're going to imitate mom anyway using whatever doll they've already got," he said.

But how about playdates? Out in public, he asked.

"It's already hard to tell a child they can't take 'that' toy with them to their sibling's soccer game." he said. "There may be a time and place for this doll, but I find the idea kind of creepy."