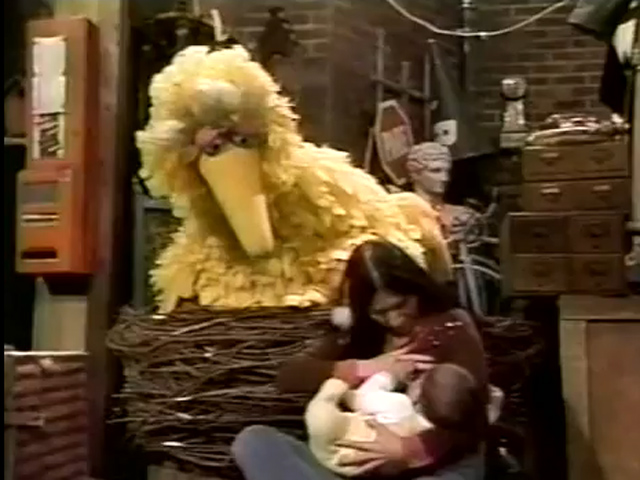 (CBS) Sunny day, sweepin' the clouds away, on my way to where the...moms breastfeed?

Sesame Street, America's landmark children's television show, is being urged by parents to bring breastfeeding back on air.

Famous for its educational techniques, the show premiered in 1969. Back then, breastfeeding on-screen was not unusual. In one 1977 episode, guest star Buffy St. Marie breastfed her baby, explaining "I'm feeding the baby. See? He's drinking milk from my breast."

In another episode, Sonia Manzano, who starred on the show as Maria, nursed her real-life daughter - modestly covered, so only the baby's tiny hand showed (video below). A child asked, "Is that the only way you can feed her?" and Maria said it isn't. "Sometimes I feed her with a bottle. But you know? I like this way best. It's natural, it's good for her, and I get a chance to hug her some more."

In the 1990s, Sesame Street stopped airing clips showing breastfeeding, showing only bottle-feeding instead, according to the authors of the petition.

But parents want breastfeeding to be normalized again. A petition on the website care2.com, titled "Bring Breastfeeding Back to Sesame Street!" currently holds over 9,500 signatures. The petition letter states that advocates simply want both ways of feeding - bottle and breast - to be seen as normal, rather than showing just one.

"If we normalize breastfeeding in our community, especially with our children, we can help raise a generation of breastfeeders which will support our economy, make for healthier children and lessen the risk of breast cancer for many nursing mamas!" the petition reads.

According to 2008 data from the Centers for Disease Control and Prevention, 44 percent of mothers breastfeed their babies through 6 months, 14.8 percent breastfeeding exclusively.

Last month, another breastfeeding public initiative took form when moms around the country ordered a nationwide "nurse-in" at Target stores to protest unfair treatment one nursing mother received at the hand of Target employees in Texas, CBS News reported. Women around the country protested at more than 100 stores.

What does Sesame Street have to say? Sherrie Westin, executive vice president of Sesame Workshop, doesn't have an anti-breastfeeding agenda, TIME reports. "There has never been any edict to remove breastfeeding from the show," Westin said. "We have included it and absolutely would include it again if it were a natural part of the storyline."

What do you think? Should Sesame Street teach kids about breastfeeding?