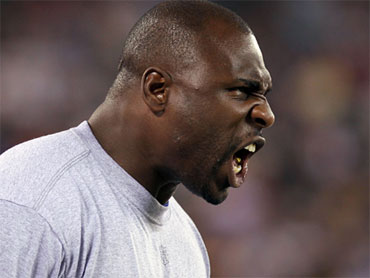 (CBS/AP) Embattled Giants running back Brandon Jacobs will meet with GM Jerry Reese on Monday and request to be traded, reports Vinny DiTrani of The Bergen Record.

"According to a source, Brandon Jacobs will meet with Giants management today and ask to be traded. Might not be a bad idea for both sides," tweeted DiTrani.

Jacobs, who has lost his starting position to Ahmad Bradshaw, apparently tried to throw his helmet down, but instead, it flew into the stands. Security personnel had to retrieve the helmet from the fans while Jacobs appeared to be explaining to coach Tom Coughlin what happened.

"I was frustrated and went to throw it down on the ground, and it got caught on my finger and went into [the stands]," he said. "I apologize for that. It was frustration on my part."

Jacobs had three carries for 8 yards in the first half and had just one rush for no yards in the third period. It was just one of many things that went wrong for the Giants in the 38-14 loss.

"From what I understand, he lost his poise and did something he shouldn't have done, and if someone was hurt, then we would all feel bad about that," Coughlin said.

Jacobs played sparingly after the incident, but Coughlin said it was because the Giants were behind and in hurry-up mode. Coughlin also said the 6-foot-4, 264-pound Jacobs spent too much time running laterally.

"We've seen too much of that, that east and west stuff," Coughlin said. "Find someplace to go and get up. Get up north."