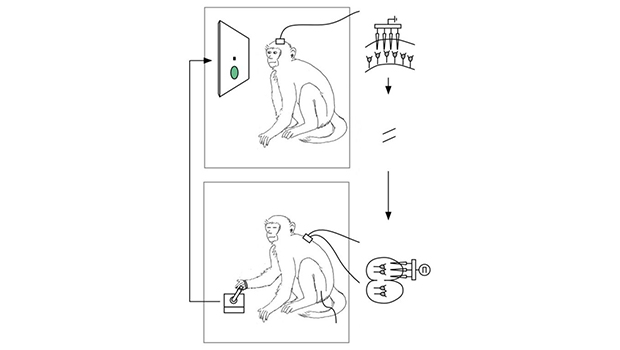 In work inspired partly by the movie "Avatar," one monkey could control the body of another monkey using thought alone by connecting the brain of the puppet-master monkey to the spine of the other through a prosthesis, researchers say.

"However, we were interested in seeing whether one could use brain activity to help control one's own paralyzed limb," said study author Ziv Williams, a neuroscientist and neurosurgeon at Massachusetts General Hospital of Harvard Medical School in Boston. "The benefit there is that you are using your own body as opposed to a mechanical device, which can need a lot of support and is not always practical to carry around with you."

Ultimately, "the hope is to create a functional bypass for the damaged spinal cord or brainstem so that patients can control their own bodies," Williams told Live Science.

"I was inspired a little by the movie 'Avatar,'" Williams said. The main character in the 2009 sci-fi film is a paraplegic, and connects his brain to a computer that helps him control an artificial body.

The avatar monkey was sedated so that he had no control over his own body. Computers decoded the brain activity of the master monkey and relayed those signals to the spinal cord and muscles of the avatar monkey. This allowed the master to control the cursor by moving the hand of the avatar. The master received a reward of juice if he successfully moved the cursor onto a target.

"Probably the biggest challenge we had was having this happen in real-time," Williams said. "In theory, you can record neuronal activity any time, analyze it offline, and use those signals to stimulate the spinal cord or muscles. The trick is being able to figure out what the monkey is intending in real-time and then stimulating the spinal cord or muscles to create the desired movements."

Controlling every single muscle in a limb to carry out a desired motion would be very complex. The researchers simplified this problem "by focusing on the target of the movement as opposed to which muscles and joints are used for the movement," Williams said.

The scientists emphasize the goal of this research is not for one person to control the body of another. Rather, when it comes to treating patients with spinal cord injuries, such as quadriplegics, "we envision putting a microchip into the brain to record the activity behind the intent for movement and putting another microchip in the spinal cord below the site of injury to stimulate limb movements, and then connecting the microchips," Williams said.

"This is just a proof-of-concept," Williams said. "We only had the monkeys aim for a few targets at a time — to be clinically useful, we'd have to be able to cause many different movements in space for fine motor control. Still, we think in principle that is possible."

Williams and his colleagues Maryam Shanechi and Rollin Hu detailed their findings online today (Feb. 18) in the journal Nature Communications.

Do violent video games lead to criminal behavior?
Thanks for reading CBS NEWS.
Create your free account or log in
for more features.
View CBS News In
CBS News App Open
Chrome Safari Continue
Be the first to know
Get browser notifications for breaking news, live events, and exclusive reporting.