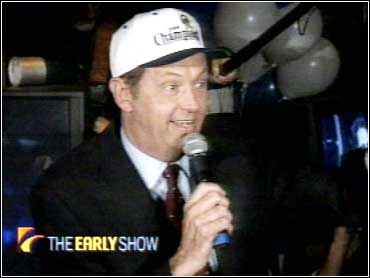 Democratic presidential candidate Bill Bradley said Sunday he might put his vice president in charge of running the country if treatment for his non-life-threatening heart condition forced him under anesthesia.

"I think that that's probably appropriate," Bradley said Sunday. "I'll make the decision at the time. But I think that it would be an appropriate thing if I decided to" undergo a course of treatment that incapacitated him.

Bradley's doctor talked to the CBS News Early Show on Tuesday, telling Dr. Emily Senay that, while Bradley has no increased risk of heart disease or stroke, there may be times when the former senator from New Jersey would need special medical attention.

Bradley, 56, answered questions about his irregular heartbeat after acknowledging that treatment required him to be unconscious three times since 1996, when the condition was diagnosed.

His doctors have reaffirmed that he is physically fit to be president.

Bradley said that under this particular treatment, which uses a jolt of electricity to return the heart to its normal rhythm, "there is a period of about, I'd say, three or four minutes when you are under anesthesia."

He said the public shouldn't worry that he might have to invoke the 25th Amendment under such a circumstance.

"I think that it's a very simple procedure. There is virtually no risk," he said. "And I don't think that that would be a problem since you'd only be out about three or four minutes."

The 25th Amendment outlines the process of presidential succession under a number of scenarios, including if the president decides he's unfit to run the country.

The amendment also establishes who takes over if a president is removed, dies or resigns (the vice president) and permits the vice president, when backed by a majority of the Cabinet, to assume presidential powers after declaring to Congress that the chief executive "is unable to discharge the duties and the powers of his office."

It was ratified by Congress in 1967, four years after President Kennedy's assassination. Until then, the Constitution did not specify what to do if a president were alive but unable to serve.

George Bush, whose son, George W., is the front-runner for the GOP presidential nomination, is the only vice president to assume powers under the amendment. In 1985, when President Reagan had surgery to remove an intestinal tumor, he transferred his powers to Bush for about nine hours.