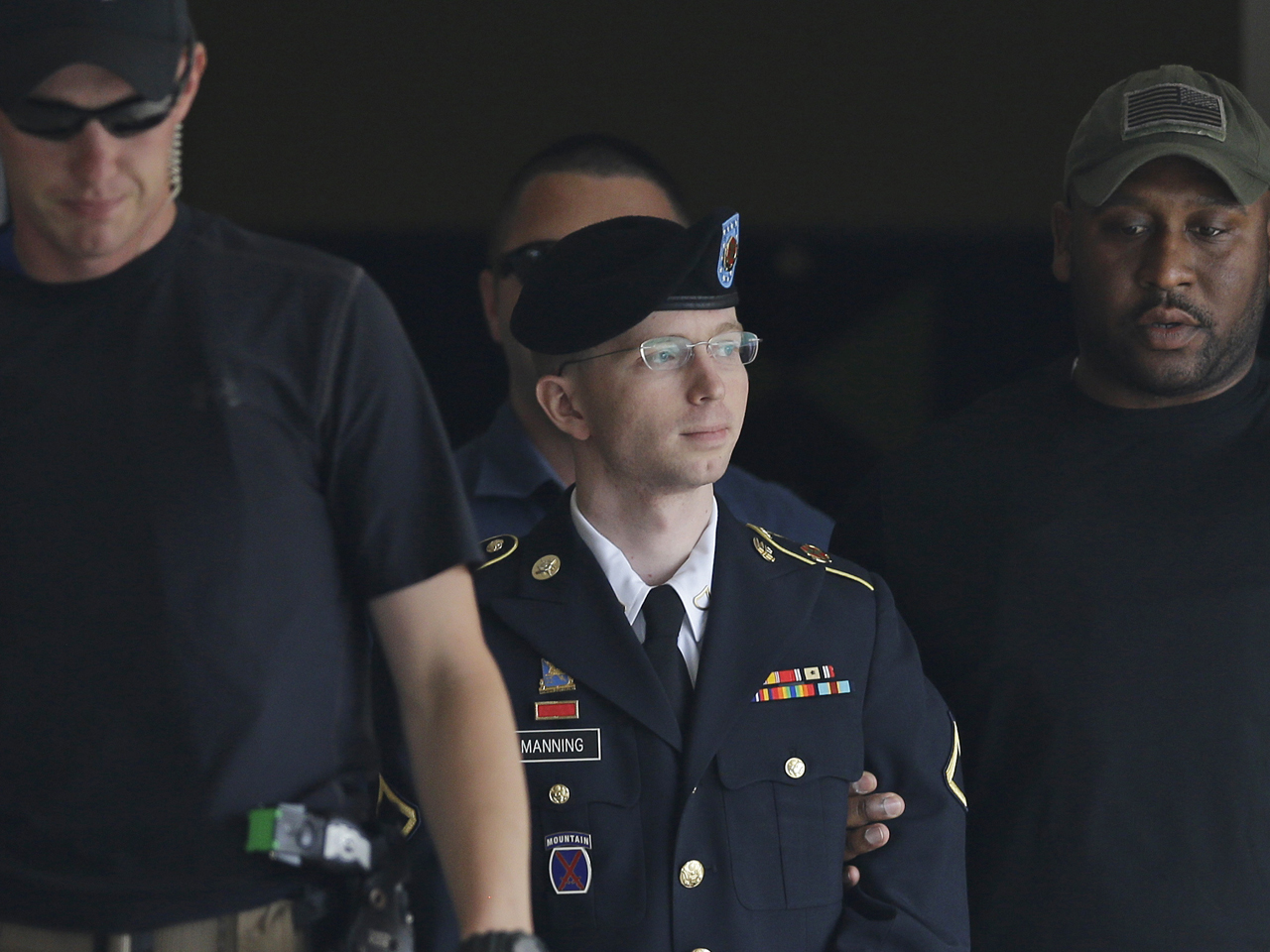 Bradley Manning, the Army private who was responsible for the largest leak of confidential information in U.S. history, was sentenced Wednesday to 35 years in prison by a military judge.

About 3.5 years (1294 days) will be subtracted from Manning's sentence. The 1294 days are the number of days he's been detained plus the 112-day credit he received for excessively harsh treatment while in a Marine Corps brig in Quantico, Va. Even with the time subtracted, he'll have to serve at least one-third of his sentence before he is eligible for parole, meaning that if nothing changes in post-trial hearings, he could potentially be free in about 6.5 years, his lawyer David Coombs said at a press conference after the sentencing.

Manning will also be dishonorably discharged, forfeit all pay and benefits, and be reduced to the grade of "private E-1" (PV1), the lowest rank possible for an enlisted member of the Army.

Manning's legal team has said that among the many post-trial legal maneuvers they have planned, they will apply for a pardon from President Obama. White House spokesman Josh Earnest said at a press conference Wednesday there was a process for pardons. "I'm not going to get ahead of that process," Earnest said.

Manning stood at attention and appeared not to react to the sentencing, according to the Associated Press. Some of the spectators gasped when the verdict was read, and Manning's supporters expressed shock at the length of the sentence.

After the hearing, Coombs said he and others escorted Manning to a back room of the courthouse, and that everyone but Manning was crying.

"He looks to me and says: 'It's okay...I know you did your best. We're gonna get through this,'" Coombs said. "I'm in a position where my client is cheering me up."

Manning is likely to serve his time in Ft. Leavenworth in Kansas, the main military prison in the U.S.

Coombs said he has health concerns for Manning, whom he described as having "gender dysphoria," which is a condition in which there is a conflict between a person's physical gender and the gender he or she identifies as. Coombs said he is going to seek to have that condition addressed during Manning's detention.

Through Coombs, Manning's family released a statement saying: "We are saddened and disappointed in today's sentence. We continue to believe that Bradley's intentions were good."

The American Civil Liberties Union put out a statement critical of the sentence.

"When a soldier who shared information with the press and public is punished far more harshly than others who tortured prisoners and killed civilians, something is seriously wrong with our justice system," said Ben Wizner, director of the ACLU's Speech, Privacy & Technology Project.

WikiLeaks, on Twitter, called the sentence a "significant strategic victory" and claimed Manning could be free within a decade.

Daniel Ellsberg, the man behind the "Pentagon Papers" leak in the 1970s, told the AP Manning was "one more casualty of a horrible, wrongful war that he tried to shorten. I think his example will always be an inspiration of civil and moral courage to truth tellers in the future."

"Bradley Manning betrayed his country, his obligations as a Soldier, and the trust of all Americans. He put the lives of our troops and our allies in danger," McKeon said.

The 25-year-old who gave thousands of classified U.S. military and diplomatic documents to WikiLeaks was acquitted of aiding the enemy in a military court-martial, but was convicted on multiple other counts.

The charge of aiding the enemy was the most serious of 21 counts. It carried a possible life sentence without parole. Manning was ultimately convicted of six espionage counts, five theft charges, a computer fraud charge and other military infractions.

Manning pleaded guilty earlier this year to reduced versions of some charges. He faced up to 20 years in prison for those offenses, but prosecutors pressed ahead with the original eight federal Espionage Act violations, five federal theft counts, and two federal Computer Fraud and Abuse Act violations, each punishable by up to 10 years; and five military counts of violating a lawful general regulation, punishable by up to two years each. All told, Manning faced a maximum of up to 90 years in prison for his various convictions.

Manning had chosen to have his fate decided by a judge, Army Col. Denise Lind, rather than a military jury. Col. Lind gave no explanation for her verdict or why she was not convinced by the government's contention that Manning knew the material he provided to WikiLeaks would make its way to the enemy.

There were no minimum sentencing requirements for Judge Lind to follow.

A prosecutor suggested Manning be sentenced to 60 years in prison because he betrayed his country. The soldier's defense attorney didn't recommend a specific punishment but suggested the limit of his punishment should be 25 years, since that is when the classification of some of the leaked documents expires.

Manning himself did not testify during the trial itself, but in a pre-trial hearing said he wanted to expose what he called the American military's "bloodlust" and disregard for human life in Iraq and Afghanistan, as well as its dishonest diplomacy, and that he carefully selected material that wouldn't put troops in harms' way. His attorney has tried to portray Manning as a whistleblower with good intentions.

During a sentencing hearing, Manning apologized for causing harm to his country.

"I am sorry that my actions hurt people. I'm sorry that they hurt the United States," he said as he began.

The soldier said that he understood what he was doing but that he did not believe at the time he would cause harm to the U.S.