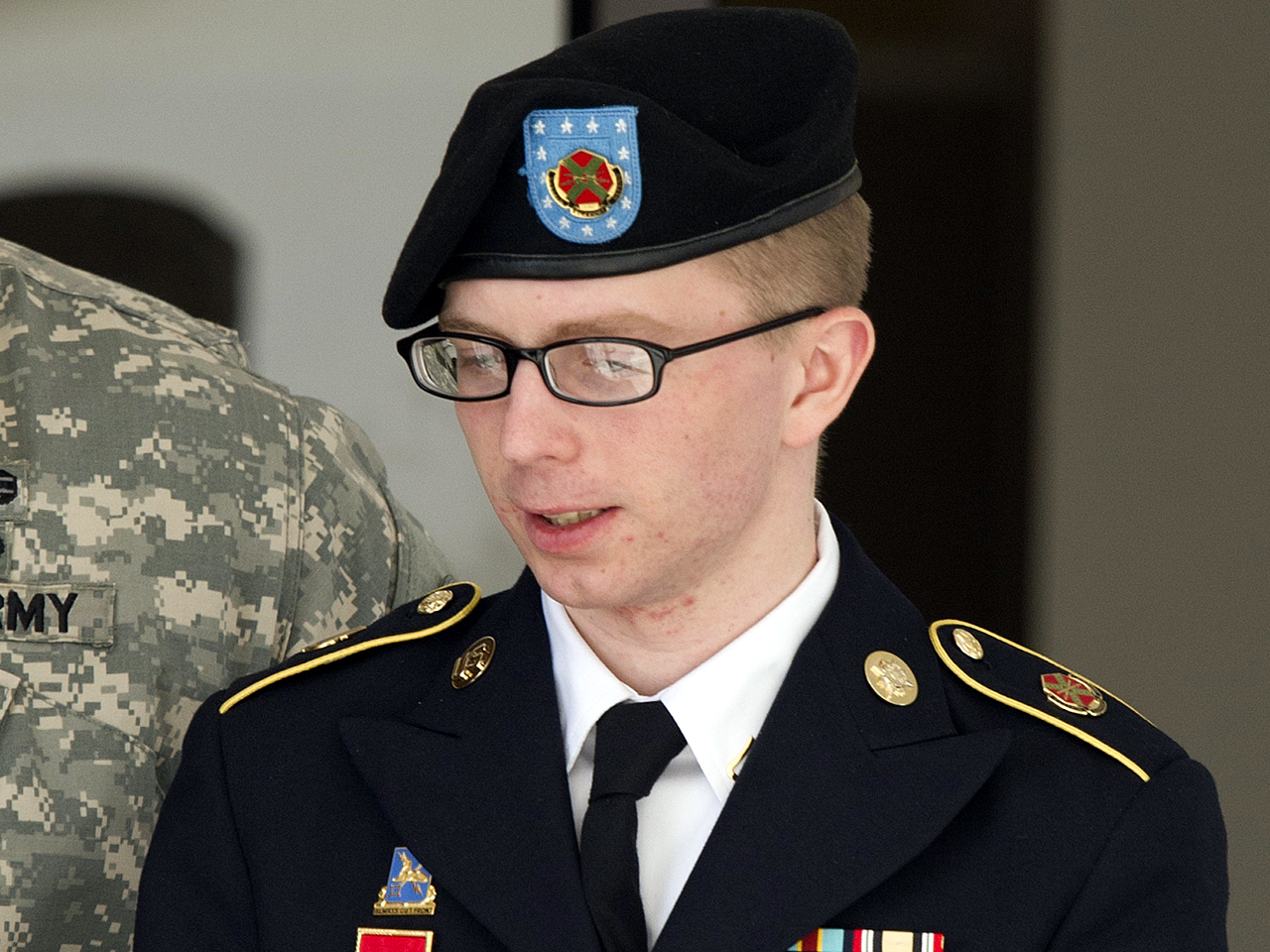 FORT MEADE, Md. A U.S. Army judge has accepted an offer by a private to plead guilty to violating military regulations in the biggest leak of classified material in U.S. history.

Pfc. Bradley Manning admits to sending hundreds of thousands of Iraq and Afghanistan battlefield reports, State Department diplomatic cables and other files to WikiLeaks while working as an intelligence analyst in Baghdad.

An Army judge accepted the pleas to 10 charges at a hearing Thursday. Manning could face a maximum of 20 years on those charges alone.

Prosecutors say they plan to move forward with an additional 12 charges against him, including aiding the enemy. That charge could carry a life sentence.

Earlier, Manning offered to plead guilty Thursday, saying he spilled the secrets to expose the American military's "bloodlust" in Iraq and Afghanistan.

It was the first time Manning directly admitted leaking the material to the anti-secrecy website WikiLeaks and detailed the frustrations that led him to do it.

Sitting before a military judge, the slightly built 25-year-old soldier from Oklahoma read from a 35-page statement through his wire-rimmed glasses for more than an hour. He spoke quickly and evenly, showing little emotion even when he described how troubled he was by what he had seen.

"I believed that if the general public, especially the American public, had access to the information ... this could spark a domestic debate on the role of the military and our foreign policy in general," Manning said.

"Basically they're saying that they're willing to plead guilty to some of the offenses, recognizing that he understands the gravity of what he did, which will of course have an effect on himself on the mercy of the panel of the jury in terms of the sentencing process," said Addicott. "But he's not pleading guilty to everything, so he's kind of splitting the baby."

Manning said he didn't think the information would harm the U.S. and he decided to release it because he was disturbed by the conduct of the wars in Afghanistan and Iraq and the seeming disregard by American troops for the lives of ordinary people.

"I felt we were risking so much for people who seemed unwilling to cooperate with us, leading to frustration and hatred on both sides," he said. "I began to become depressed at the situation we found ourselves mired in year after year. In attempting counterinsurgency operations, we became obsessed with capturing and killing human targets on lists."

He added: "I wanted the public to know that not everyone living in Iraq were targets to be neutralized."

Manning admitted sending hundreds of thousands of Iraq and Afghanistan battlefield reports, State Department diplomatic cables, other classified records and two battlefield video clips to WikiLeaks in 2009 and 2010 while working as an intelligence analyst in Baghdad.

The battlefield reports were the first documents Manning decided to leak. He said he sent them to WikiLeaks after contacting The Washington Post and The New York Times. He said he felt a reporter at the Post didn't take him seriously, and a message he left for news tips at the Times was not returned.

In a statement, WikiLeaks founder Julian Assange, holed up in the Ecuadorean Embassy in London to avoid extradition to Sweden to face sex-related charges, called the Times "cowards."

"The only safe way to get these cowards to publish anything is to get WikiLeaks to publish it first," Assange said.

Manning said he was appalled by a 2007 combat video of an aerial assault by a U.S. helicopter that killed 11 men, including a Reuters news photographer and his driver. The Pentagon concluded the troops mistook the camera equipment for weapons.

"The most alarming aspect of the video to me was the seemingly delightful bloodlust the aerial weapons team happened to have," Manning said, adding that the soldiers' actions "seemed similar to a child torturing ants with a magnifying glass."

As for the sensitive State Department cables, he said they "documented backdoor deals and criminality that didn't reflect the so-called leader of the free world."

Manning said when he was on leave, he visited his boyfriend in the Boston area and said he asked him hypothetical questions about how to go about sharing the information he had. He said his boyfriend didn't really understand what he was talking about and that their relationship grew distant.

The Obama administration has said releasing the information threatened valuable military and diplomatic sources and strained America's relations with other governments. The administration has aggressively pursued individuals accused of leaking classified material, and Manning's is the highest-profile case.

Manning has been embraced by some left-leaning activists as a whistle-blowing hero whose actions exposed war crimes and helped trigger the Middle Eastern pro-democracy uprisings known as the Arab Spring in 2010.

"Today's events confirm that," said Assange. "Both the U.N. and the U.S. military have formally found him to have been mistreated. All those involved in the persecution of Bradley Manning will find cause to reflect on their actions."

WikiLeaks did not immediately return a text message for comment on Manning's statement. The group has been careful never to confirm or deny whether he was the source of the documents it has posted online.

On its Twitter feed Thursday, WikiLeaks called Manning an "alleged source" and noted that he was detailing "what he says" were his dealings with the online organization.