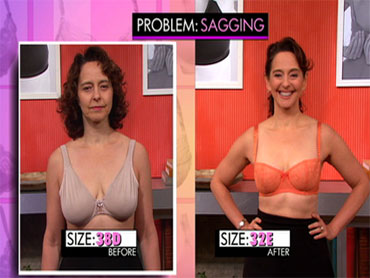 With so many options these days, finding the right bra isn't always a snap.

And odds are the one any given woman is wearing doesn't fit right.

Nearly 85 percent of women are wearing the wrong bra, according to Susan Nethero, who's known as "the Bar Whisperer." She's the founder of Intimacy Boutiques."

She says 80 percent of women who experience an actual bra-fitting report it was a life-changing moment, based on the results of a recent Intamcy Boutiques survey.

On "The Early Show" Wednesday, Nethero, who's been fitting bras for more than 20 years, introduced four women she's actually fitted for bras and explained the five bra problems they had - and how she solved them. She showed "before" pictures, and the women modeled their new bras.

Nethero says it's "very important" to get fitted for bras.

She points out that the 85 percent of all women wearing the wrong size bra equates to some 90 million women over the age of 18! Women, she says, should get fitted at least once a year. "We know woman's bust size changes six times in her life, she adds, "resulting from weight gain to menopause.

Sixty-three percent of women want more comfort in a bra, and that's a very achievable goal, if you get a bra fitting, which usually takes around 30 minutes. The right bra generally improves a woman's shape, making her look taller and thinner without diet, exercise, or any pain.

"The truth is, women blame their bodies for fit problems and don't realize all these problems can be fixed with a fitting."

These are significant. As for spillage, the average bra size is now a 34D or E. Finding the right size in attractive size can be challenging so thats when we see women wearing a smaller bra, which is a common mistake. 50% of all women complain about back fat and what most women don't know is that its a symptom of a bra being too big around the body where the bra rides up the back and pushes the soft tissue up the back creating back fat.

Before: Elizabeth is wearing a size 38C which is quite large around her body, and the cup is too small for her chest. This is visible under fitted clothes.

After: Now you can see we've gone down to see a 36E. She went from a t-shirt bra to a fashionable contour bra that is attractive & will still give her a smooth appearance under her clothes. You can see the cup is deeper and it is more centered on her body so she actually looks smaller and much more attractive in a youthful style that would be fun for a young woman like Elizabeth to wear. She actually has more lift.

Before: You can see its too big and its riding up her back, its creating ridges along her back especially above the bra. Back fat is a symptom of a bra being too big around and not too tight which is what most women think.

After: Now with the proper fitting, its lower on her back. If you turn (Elizabeth turns) sideways her bra is leveled across her body.

Before photo: Ingrid's lost a lot of weight and also started an exercise program. Her bra is too big around and too large in the cup. And 90% of our support comes from being firm and level around the body, she doesn't have that in this bra.

Sagging is the result of weight gain or weight loss, nursing, etc. When a woman's tissue becomes softer tissue getting the right support becomes an issue. 50% of women want more support. By getting the right size and right style we can lift every woman's bust line and reduce the sagging. In the right bra we can make her look like she's gotten a breast lift without spending the money.

After: So we went from a 34B to a 32E, giving her a smaller band around her shapley new figure. She's getting uplift from the deeper demi cup & we've put her in a youthful style that shows off her bust line. Many women Ingrid's age think they cant wear a youthful look but Ingrid is proof you can definitely wear this and look and feel good. You can see when her bust line is lifted up - its centered on her frame and that is a way for every woman to look taller, thinner since shes not splaying east, west or sagging. If we turn Ingrid to the side (Ingrid turns to the side) bust line should be positioned mid-way between the shoulder and the elbow and centered on her body frame.

MODEL INFO: Diane, age: 29
DimitySO, $55
Problem: Not enough support in her strapless bra, she was looking for the perfect strapless
She went from a 36D to a 34F after her bra fitting.

Before: Diane was wearing a 36D in this bra and its too big around so she's struggling to keep that bra from sliding down.
Most women because they're buying bras too big around, they're not getting enough support. They feel like their bra is sliding down their body and when they pull it up that actually makes the bra become more unstable. This is where its really important to get the right size and get the proper fitting. Most importantly it should be firm around the body and for most women that means going down one size in the back, and going up as much 2 cup sizes because theres no strap providing stability.

After: So we decided to put her in a 34F for fantastic. The bra back on a strapless bra needs to be level or lower around the body then it will stay secure. Women should always look for a strapless bra with extra silicone grippers that line the inside of the bra for extra grip and hold. As you can see she's wearing one strap, this is a strapless convertible that gives her the option of wearing it 5 different ways total: racer-back, asymmetrical, halter, a regular bra, or just strapless. Terrific value for $55.

PROBLEM FOR WOMEN WHO MAY HAVE A SMALLER BUST:.GAPPING. WHICH IS WHEN THERE IS A GAP BETWEEN YOUR BREAST AND CUP

MODEL INFO: Beverly, age: 51
Lejaby, $59
Problem: Gapping, she wants more support and cleavage
She went from a 34A to a 32C after her bra fitting.

Before: You can see that she has on a 34A. The cup is gapping. Her breasts are sagging into the bra and shes not getting much support. Its very challenging to find smaller cup sizes and small bandwith in demi or enhancing styles so most women are buying styles that are too big around. As a small busted woman finding the right bra can be challenging.

After: She's fuller busted than she thought but her tissue is smaller as a result of nursing children..all 9 of them! Like most women she wants cleavage so we went to a demi bra that would enhance her bust line and a smaller back so that it would be secure. We eliminated gapping by bringing the bra down her bra, by putting her in 32 than a 34.