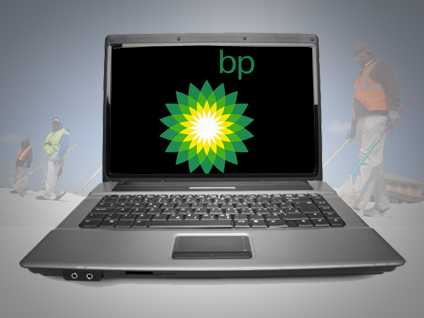 BP spokesman Curtis Thomas said the oil giant on Monday mailed out letters to roughly 13,000 people whose data was stored on the computer, notifying them about the potential data security breach and offering to pay for their credit to be monitored. The company also reported the missing laptop to law enforcement, he said.

The laptop was password-protected, but the information was not encrypted, Thomas said.

The data included a spreadsheet of claimants' names, Social Security numbers, phone numbers and addresses. But Thomas said the company doesn't have any evidence that claimants' personal information has been misused.

Special Section: Disaster in the Gulf
Photos: Oil Still Remains in Spots Along the Gulf Coast

"We're committed to the people of the Gulf Coast states affected by the Deepwater Horizon accident and spill, and we deeply regret that this occurred," he said.

The data belonged to individuals who filed claims with BP before the Gulf Coast Claims Facility took over the processing of claims in August. BP paid roughly $400 million in claims before the switch. As of Tuesday, the GCCF had paid roughly $3.6 billion to 172,539 claimants.

Thomas said no one will have to resubmit a claim because of the lost data.

The employee lost the laptop on March 1 during "routine business travel," said Thomas, who declined to elaborate on the circumstances.

"If it was stolen, we think it was a crime of opportunity, but it was initially lost," Thomas said.

BP is offering to pay for claimants to have their credit monitored by Equifax, an Atlanta-based credit bureau.

Asked why nearly a month elapsed before BP notified residents about the missing laptop, Thomas said, "We were doing our due diligence and investigating."

Matt O'Brien, part owner of Tiger Pass Seafood, a shrimp dock in Venice, La., said he had filed a claim with BP before the GCCF took over processing claims in August. A call from an AP reporter on Tuesday was the first he had heard that his personal information may have been among the data compromised.

"That's like it's par for the course for them," O'Brien said of BP. "They can't seem to do nothing right."

Beau Weber, a fishing guide in Lafitte, La., also had filed a claim with BP prior to Aug. 23, and he had even received several monthly payments from BP. He said he hadn't received a letter from BP about the missing laptop.

"It's terrible," he said of the breach. "I kinda work hard for the things I have. I wouldn't want somebody with a computer to be able to take it from me. It's very disturbing. It's like another gallon of gas thrown on the fire."