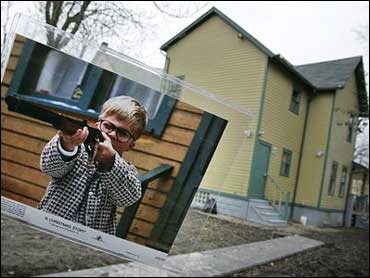 WOODWARD, Okla. - In a scene straight from the movie "A Christmas Story," an 8-year-old Oklahoma boy got his tongue stuck to a metal pole after he licked it on a dare.

Officials say when rescue crews arrived Tuesday morning, the boy was standing on his tiptoes, trying to wriggle his frozen tongue free from a stop sign pole across the street from Woodward Middle School.

Paramedics were able to help the boy by pouring water on his tongue. Once free, the boy told officials he got stuck after his brother dared him to lick the pole.

The boy was taken to a Woodward hospital for treatment.

The scene was similar to one in "A Christmas Story," a 1983 movie adapted from Jean Shepard's memoir of a boy in the 1940s.