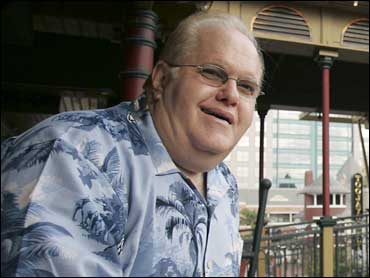 Framed posters of teen heartthrobs such as the Backstreet Boys are among the items on the auction block as creditors liquidate the assets of boy-band impresario Lou Pearlman.

Pearlman, a New York native who moved to Orlando in 1990, conjured multi-platinum success by piecing together boy bands such as the Backstreet Boys and 'N Sync in the 1990s. He claims to have made nearly $2 billion in retail music sales.

His belongings were set to be sold Tuesday to compensate banks he allegedly owes more than $130 million, and about 1,000 investors he allegedly defrauded of $317 million.

Items to be sold also include a key to the city of Orlando, gold and platinum records, artwork, high-end furniture, office supplies and restaurant equipment.

The auction was to be held at Pearlman's downtown Orlando office and two warehouses he once owned.

Authorities say they don't know Pearlman's whereabouts, and a blizzard of lawsuits has risen against him from banks and individual investors.