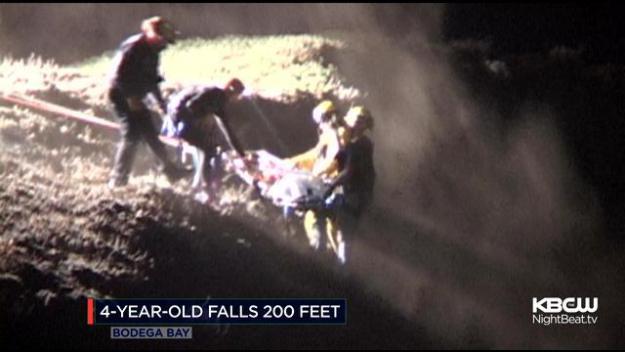 SONOMA, Calif. -- A 4-year-old boy was rescued after he fell more than 230 feet down a cliff at Bodega Head off Bodega Bay on Monday, CBS San Francisco reports.

The boy's mother reported that her son had fell off a cliff as she was walking with him on a trail, Bodega Bay Fire Protection District Fire Chief Sean Grinnell said.

He was with his parents and sibling before the incident, Vernon said.

Within 30 minutes of arriving on scene, rescuers descended 238 feet to a beach to reach the boy who was found conscious and crying, according to Grinnell.

The Santa Rosa Press Democrat reports two firefighter-paramedics rappelled down with a rescue basket and reached the boy, with help from illumination flares fired into the air from a Coast Guard motor lifeboat.

Foggy conditions prevented helicopter crews from arriving to the scene to airlift the boy who was instead transported by ambulance to Santa Rosa Memorial Hospital, Grinnell said.

"Multiple traumatic injuries," Grinnell told KPIX 5. "The child was conscious and alert, obviously crying which was completely appropriate for the injuries that he had sustained."

The child was listed in critical but stable condition.

Personnel from Cal Fire, California State Parks and helicopter crews from the California Highway Patrol and U.S. Coast Guard responded to the rescue.