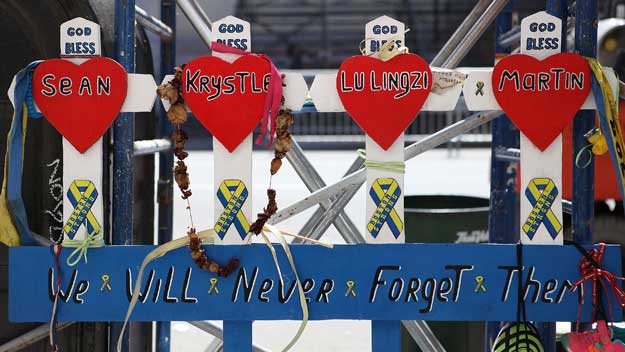 BOSTON -- A moment of silence, the tolling of church bells and calls for kindness marked the second anniversary of the 2013 Boston Marathon bombings Wednesday, with emotions clearly still raw from the deadly blasts during one of the city's most cherished events.

On Boylston Street, people openly wept and hugged as church bells tolled at 2:49 p.m., the time the first bomb went off at the race's finish line April 15, 2013.

As CBS Boston reported, bombing survivor Tom Ralston was responsible for tolling the bells inside Old South Church on Kenmore Square, yards away from where one of the bombs exploded.

"It still feels like yesterday, to be honest," said Aleksander Jonca, a Boston resident who ran the marathon in 2013 and plans to again this year. "Two years later, I feel like we're still struggling to find the words to describe what happened that day."

Large crowds formed at the two roadside spots where the bombs detonated, killing three people and injuring 260 others.

Workers, tourists, runners wearing Boston Marathon gear and bystanders with "Boston Strong" shirts fixed their eyes on the commemorative banners that had been revealed in a silent ceremony hours earlier. Below them were bouquets of brightly colored flowers and wreaths.

More than 100 blue and yellow balloons -- the marathon's colors -- were released into a cloudless sky as the church bells faded.

"As a mom, I still haven't moved on," said Liz Norden, a Stoneham resident whose two adult sons -- J.P. and Paul -- each lost a leg in the attack. "I know my boys have moved on. But it's hard. I see them put on a leg every day. It's still raw."

At Old South Church, hundreds gathered for an interfaith service with Christian, Muslim and Jewish leaders who focused on healing.

"We turn now to acknowledge that life goes on," said the Rev. Demetrios Tonias, dean of the Annunciation Greek Orthodox Cathedral in Boston. "Living goes on. Our prayers go on. Our grief goes on. But so, too, does our resiliency go on."

The day of remembrance, which had been declared "One Boston Day" by Mayor Marty Walsh, began at 7:30 a.m. at the site of the blasts.

Walsh walked along the marathon route with the family of Martin Richard, an eight-year-old Dorchester boy who was the youngest of the victims.

With the plaintive wail of bagpipes in the background, Walsh, Gov. Charlie Baker, and others unveiled commemorative orange banners bearing a white heart and the word "Boston" on them at the site of the blasts on Boylston Street.

The four banners were mounted on light poles wrapped in blue and yellow flowers, the marathon's colors.

Baker raised a banner in front of Marathon Sports, the site of the first explosion, with the help of the family of Krystle Campbell, a 29 year-old restaurant manager who was killed.

Minutes later down the street, Walsh and the Richard family -- father Bill, mother Denise, brother Henry and sister Jane -- unveiled a banner in front of the old Forum restaurant, where the family had been standing when the second bomb exploded.

In addition to Martin's death, Henry Richard was the only member of the family who escaped being severely injured. His sister Jane, who was six years old at the time, lost a leg. Denise sustained a traumatic head injury and lost sight in one of her eyes. Bill received burns and shrapnel wounds to his legs.

Other victims were also in the crowd. Jeff Bauman, who lost his legs above the knee in the blasts, exchanged a big hug with cowboy-hat-wearing Carlos Arredondo, who helped save his life two years ago.

The Boston Red Sox and the Washington Nationals paused their afternoon baseball game at Fenway Park out of respect for the anniversary. Bauman threw out the first ceremonial pitch.

The subdued memorial accompanied acts of kindness and generosity planned throughout the day.

People donated blood to the Red Cross and helped clean up neighborhood parks while schoolchildren wrote thank-you cards and delivered pizzas to police and fire departments in recognition for their service.

Surviving bomber Dzhokhar Tsarnaev, 21, was convicted last week of 30 counts at his federal trial, and jurors will soon decide whether he should be sentenced to life in prison or the death penalty. His older brother, Tamerlan, died following a shootout with police days after the attacks.