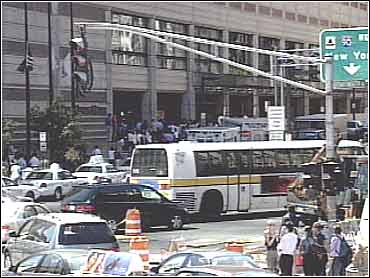 U.S. Attorney General John Ashcroft warned the mayor and the acting governor that terrorist strikes could be attempted in Boston in the coming days, though he stressed that no specific threats had been made, according to published reports.

Hollywood studios, already nervous in the wake of the Sept. 11 attacks, have tightened security after the FBI warned they could be targeted, trade paper Daily Variety reported Friday.

Ashcroft made calls Thursday to acting Gov. Jane Swift and Boston Mayor Thomas Menino to inform them the government had information about possible attacks, The Boston Globe and the Boston Herald reported Friday, citing sources that weren't identified.

The Globe said the attacks could be planned for this weekend; the Herald mentioned Friday and Saturday. Authorities have said Sept. 22 — Saturday — emerged as an important date in evidence found during investigations into the hijackers.

"People should not be alarmed," Menino told the Globe. "At this point, people should go about their daily routines. The police will be observant."

A few days after four commercial airliners were hijacked and crashed, the FBI warned the cities of Atlanta, Richmond, Va., and Boston about possible strikes. But the warnings were rescinded.

On Thursday, the FBI issued new warnings to local law enforcement to be on guard against possible attacks. Authorities said the warning was not based on any evidence of a direct threat but rather on raw information that there could be more strikes.

Authorities said at least four people targeted by the terror investigation were booked on one or more flights leaving San Antonio, Texas, for California or Denver on Saturday.

But on Wednesday, sources said they had no information suggesting attacks were planned for Saturday in other cities, a day with many college football games and the Miss America contest scheduled. It was unclear whether new information has emerged since then.

In Hollywood, entrances were shut down, barricades were ordered set in place and studio tours were canceled, the trade paper said.

"The FBI provided a threat advisory to the movie studios in Los Angeles," the paper quoted FBI spokeswoman Cheryl Mimura as saying. "The uncorroborated threat states that a film studio in California could be the target of a terrorist attack in retaliation for any possible bombing attacks by the United States in Afghanistan. It seems to be a credible threat."

In response, some of Hollywood's top talent agencies have advised their stars to stop taking meetings at the studios for now, the paper said.

Among the studios, Universal City-based Universal would continue to operate its popular - and profitable - studio tours, though it is "tightening and increasing security," Daily Variety said.

Warner Bros. closed three studio gates on its Burbank lot, set up barricades, and was planning to install armed guard details and metal detectors. All incoming packages were to be X-rayed, and all vehicles would be subject to search.

Last week's attacks have forced the studios and television networks to scrap, postpone or tinker with projects that had terrorist-related themes. Additionally, the TV networks, most of which are corporate siblings of film studios, have lost hundreds of millions of dollars in advertising revenues. The uncertain economic picture has sent media stocks tumbling.