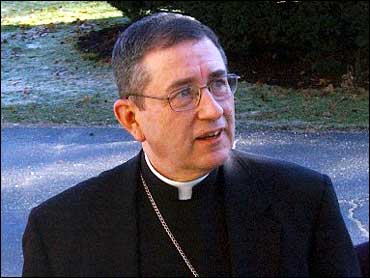 When Bishop Richard Lennon stepped in as the interim leader of the Roman Catholic Archdiocese of Boston, he pledged that he would help heal a community infuriated by Cardinal Bernard Law's failure to stop rampant clerical sex abuse.

Now, with the Vatican reportedly close to naming a permanent replacement for Law, Lennon could leave his temporary post with many tough issues unresolved and hundreds of lawsuits against the church still unsettled.

"As an observer, my conclusion would be that he's probably done as good a job as he might be expected to do under the circumstances," said Boston College historian Thomas O'Connor. "I think the word I would use would be 'stabilize.' I didn't see anything get any worse."

The newspaper called Pittsburgh Bishop Donald W. Wuerl the most likely replacement for Law, with Archbishops Harry J. Flynn of Minneapolis-St. Paul and Edwin F. O'Brien of the Military Services also on the list.

The Rev. Christopher Coyne, spokesman for the Boston archdiocese, declined to comment. Wuerl said the report was speculation.

Law stepped down as archbishop last December in the face of bitter criticism for his handling of the scandal, which unfolded throughout the year as dozens of priest personnel files were ordered released by a Superior Court judge. The documents revealed that church officials knowingly shuffled priests accused of abuse between parishes.

The Vatican appointed Lennon, 56, a relative unknown who was untainted by the scandal, as apostolic administrator - the temporary spiritual leader of the archdiocese's more than 2 million Catholics.

"He took on one of the toughest jobs imaginable," said Jim Post, director of the church reform group Voice of the Faithful. "He came into this position with an enormous amount of goodwill. Even the sharpest critics of the church were sympathetic to the enormity of the challenges he faced."

As one of his first acts, Lennon celebrated Sunday Mass at Boston's Cathedral of the Holy Cross and then, surrounded by a jostling throng of reporters and photographers, strode outside to shake hands with protesters.

The greeting a marked contrast to Law, but after that auspicious beginning, Lennon was dogged by some of the same problems as the cardinal.

He was willing to meet with victims and critics, but refused - as Law did - to accept donations from Voice of the Faithful, a lay group of Catholics who sought change in the church hierarchy and more responsiveness to parishioners - and continued to ban the group from meeting on church property.

He repeatedly said he wanted to settle more than 500 sexual abuse claims, but disappointed critics when church lawyers used such tactics as seeking records and depositions from victims' therapists. A 90-day moratorium on legal proceedings, in the hopes of reaching a settlement, also came and went; another 30-day moratorium remains in force, though there haven't been obvious signs of progress.

"There's been a lot of frustration with Bishop Lennon because there hasn't been a lot of visible signs of progress made in the archdiocese," Post said. "Some of it's fair and some is unfair, but there's a perception that he hasn't been able to reverse the downward spiral."

"I think the change got people hopeful, but the reality is it's a 100 percent continuation of the policies of Law. That realization over time has been terribly disappointing to survivors and their parents," he said. "They had hope, and they lost it again."

Still, the Rev. Robert Bullock, head of the Boston Priests Forum and a critic of Law, called Lennon's challenges "extraordinary." He understands the disappointment with Lennon, but said he has handled the tasks before him with "great grace."

"He knew full well ... he couldn't do anything that would in any way tie the hands of his successor," Bullock said.