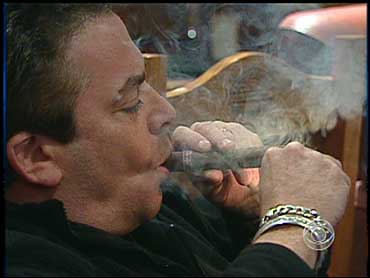 Boston will become the nation's second city to ban the sale of cigarettes by pharmacies on Monday, as new rules approved by the city's public health commission take effect.

The regulations passed by the commission two months ago also ban colleges from selling tobacco products on campus and will force smoking bars to shut their doors within a decade, reports CBS News correspondent Randall Pinkston.

"In 10 years, all smoking bars in Boston should be gone," Dr. Barbara Ferrer, the commission's executive director, tells CBS News.

There are only 11 left, and the city vows not to license any more. Health officials are especially perturbed at the emergence of half a dozen of hookah bars, which cater to college students and young adults.

"Once you get started, quitting is very hard," Hallet says. "We still have a half a million deaths a year in the country every year that are attributable to the use of tobacco."

The direct financial impact on pharmacies is expected to be small, as cigarettes account for just one-to-three percent of sales.

At Sullivan's Pharmacy, a family-owned drug store in Boston, owner Gregory Laham worries about diminished foot traffic, but will remove cigarettes from the shelves without protest.

"We know the dangers of smoking, and I support the ban," Laham, tells CBS News. "As a pharmacist, it's obvious; we shouldn't be selling cigarettes."

The largest number of pharmacies in Boston belong to CVS and Walgreens, and both chains say they will comply with the new rules and are working on new merchandise displays.

More controversial is the limit on cigar bars.

"Our goal is one of promoting health and safety for workers and for residents," says Ferrer. "What we are saying is that if you personally smoke, we should reduce the exposure your smoking habit may have on somebody else, in particular on workers."

But cigar bars bristle at the notion that their employees object to second-hand smoke.

"There is second-hand smoke, but we have state of the art humidifiers and smoke eaters," George Gilio, the general manager of Cigar Masters in Boston, says. During our visit, we noticed one bartender there lighting up.

"We have ten years to prove them wrong, and I think we'll do it," Gilio says.

"My position is - it's legal, if you're an adult, you can make a rational decision about it," Macdonald says.

Which echoes the feelings of the bars' clientele.

"We're adults. We have the right to choose. I choose to come into this place," says Alan Dines, a regular at Cigar Masters. "These are legal products. These are not banned products, and they're trying to regulate items that are not banned."

The original draft of Boston's new regulation would have withdrawn the cigar bar licenses within five years, but amidst the worsening receccsion, the owners prevailed for a longer reprieve.

"I think it will hurt a very fragile economy," says Robert Shick, another Cigar Masters patron.

Still, smoke-free laws are becoming commonplace across the country. Already 27 states ban smoking in restaruants, while 22 do so in the workplace, according to Americans for NonSmokers' Rights. Hundreds of colleges have restricted smoking in housing and on campus.

"Smoke-free laws protect people from exposure to a known carcinogen, and this is a way to protect the public health," sast Hallet.

The Boston health commission points to a study Massachusetts conducted with Harvard University which estimated there were 577 fewer than expected heart attack deaths every year since the state imposed its smoke-free workplace law four years ago.

"If I had my druthers, the tobacco industry would not be able to spend over a billion dollars every year advertising a lethal product," commission head Ferrer says. "Tobacco kills more people every year than alcohol deaths and murder and suicide combined."

But it's not that simple for the cigar bar owners facing extinction.

"This is my livelihood. This is what I do. You know, I have two children, a wife, a mortgage, like a lot of other people," Macdonald says. "It wouldn't be good."
By Phil Hirschkorn & Randall Pinkston