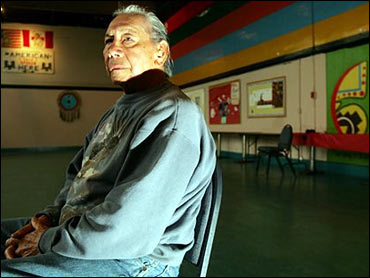 John "Sam" Sapiel gets an uneasy feeling when he crosses Boston city limits, where the full-blooded Penobscot Indian is technically a persona non grata.

An archaic law has forbidden American Indians from setting foot in the city since 1675, when settlers were at war with area tribes. Although the law hasn't been enforced for centuries, the fact that it still exists is a lingering source of anger for American Indians.

"I feel kind of put out on the whole thing, because we're being singled out as Indian people," said Sapiel, 74, who lives in Falmouth. "I think about it quite a bit."

Now, some 330 years after its passage, the state Legislature voted Thursday to strike down the old law. The bill now goes to Gov. Mitt Romney, whose spokesman said the governor intends to sign it.

After Thursday's vote, Chris "Quiet Bear" Montgomery, a Nipmuc Indian who lives in Revere, said knowledge that the law wouldn't be there any more was a significant step toward equality.

Montgomery, 79, testified at a legislative hearing this week, calling the law "a black mark against the state of Massachusetts. Not just Boston, but the whole state."

Indians and activists have been working for about eight years to get rid of the law. Before the Democratic National Convention last year, the Falmouth-based Muhheconnew National Confederacy, a coalition of American Indian tribes, called for its repeal.

Boston Mayor Thomas Menino filed a petition in the fall to dump it, and the city council passed it. But the petition didn't go anywhere on Beacon Hill until this week, when a state legislative committee sent it to the full Legislature.

The renewed effort came as a national organization of minority journalists is considering whether to hold its 2008 convention in Boston.

Unity: Journalists of Color Inc. had said it might pass over Boston for the convention because of the law. Hosting the convention would mean 8,000 or so journalists converging on Boston for four days - spending an estimated $4.5 million on lodging, dining and souvenirs.

"It is a deal breaker, because we couldn't in good heart come to a city that banned one of our members, or any group," said Unity Executive Director Anna M. Lopez. The group will pick a host city in June.

State Sen. Dianne Wilkerson, who co-chairs the committee that recommended repealing the law, said she acted as soon as she heard about the issue.

"I think the proponents for the repeal made the case that just having it on the books was offensive enough," she said.

The colonial Legislature, the General Court of the Massachusetts Bay Colony, approved the statute when tensions between colonists and Wampanoag leader Metacom broke out in violence in 1675.

The war only lasted a year, ending when Metacom was killed. Although lawmakers repealed a law creating an internment camp for American Indians a year after the war ended, the imprisonment act remained.

Sapiel said the demise of the law was a relief.

"This should have happened a long time ago," he said. "I'm glad it's happening now."