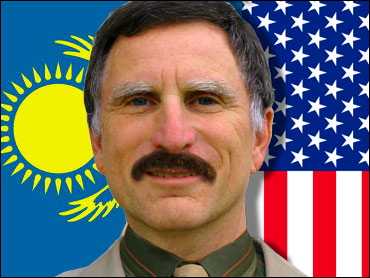 There is a movie out now called, "Borat," whose lead character is anti-Semitic, racist, and misogynistic. Oh, one more thing: I liked it.

Obviously, I'm not alone. So far, the movie has taken in over $100 million in America and another $50 million in foreign box office. What does this say about us? Are our countries filled with bigots who enjoy cheering on another bigot? Or are people watching the movie because it exposes bigotry and ignorance? Or should it be viewed as "just a movie?"

The full name of the movie is, "Borat: Cultural Learnings of America for Make Benefit Glorious Nation of Kazakhstan." It's the brainchild of British performer Sacha Baron Cohen. The movie is a fake documentary in which the character of Borat poses as a Kazakh journalist who is making a film about America. He involves real, non-acting, non-suspecting Americans in his supposed quest for understanding the culture of our country. Borat portrays his own country as ridiculously backward and immoral, and Baron Cohen portrays Borat as ridiculously backward and immoral.

At first blush, it seems like "Borat" is making fun of Kazakhstan and foreigners, but as you sit there watching the absurd depiction of this country and its residents, you realize that the movie is making fun of people who are ignorant about foreign places and people. And to one degree or another, most of us fall into that category. Admit it. Do you know exactly where Kazakhstan is?

As Baron Cohen put it, "... the joke is on people who can believe that the Kazakhstan that I describe can exist — who believe that there's a country where homosexuals wear blue hats ... and the age of consent has been raised to nine years old."

But there is still a legitimate question of whether portraying a bigot as lovable and comical is ever OK. The same question arose when "All in The Family" first came on the air in the '70s. Was lovable, bumbling Archie Bunker promoting bigotry, or was he exposing it and its ignorance? It's a tough question and one that has no easy answer. So, if you're someone who believes that certain subjects should never be joked about, I can respect that. Of course, you'll be missing out on some big laughs.

Some people are suing the moviemakers, claiming they were tricked into participating in the film — even though they signed releases. I can sympathize with some of them. They opened their homes to someone they thought wanted to learn about America, and he turned around and made fun of them. On the other hand, for those who rail against gays or women in the movie, it's hard for me to feel sorry for the fact that they may have been tricked. The Mel Gibson defense of "I was drunk" and the Michael Richards defense of "that wasn't the real me" don't work here either.

But once one lawsuit was filed, others quickly followed. Don't be surprised if we soon see lawsuits from people who claim things like, "I have an uncle named Borat, and he'd never bring a live chicken on the subway."

Here's what I thought about the movie: It's offensive, it's silly, it's juvenile, and it's really, really funny.

I'm sure part of its success has to do with its making fun of political correctness. We are so serious about everything these days that people seem to enjoy laughing about things that aren't supposed to be funny.

All of this reminds me of the advertising slogan for the old movie "That's Entertainment!" The movie came out in 1974, and it was a compilation of clips from MGM musicals. 1974 was not a particularly happy time. Tensions between blacks and whites and rich and poor seemed to be mounting each day. The number of countries with the nuclear bomb had increased. And that was the year that Nixon resigned. It was the perfect time for a movie that could make people smile and laugh.

These are pretty serious times, too. So to me, it's not surprising that a big, broad, laughing-out-loud comedy would be a hit today. Oh, that old advertising slogan I referred to? It was, "Boy, do we need it now."

Lloyd Garver writes a weekly column for SportsLine.com. He has written for many television shows, ranging from "Sesame Street" to "Family Ties" to "Frasier." He has also read many books, some of them in hardcover, but none in Kazakhi.