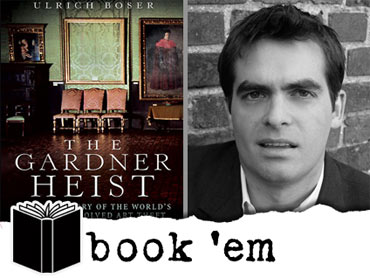 Shortly after midnight on March 18, 1990, two men broke into the Isabella Stewart Gardner Museum in Boston and stole $500 million worth of art, including one Vermeer, three Rembrandts, and five Degas. It is the largest art heist in history. But after thousands of leads—and a $5 million reward—not a single painting has been recovered.

In THE GARDNER HEIST: The True Story of the World's Largest Unsolved Art Theft, reporter Ulrich Boser tells the story behind the caper and reveals new information about the identities of the thieves. Using eyewitness accounts, exclusive interviews, and newly discovered FBI files, Boser offers evidence that mobster David Turner was behind the robbery.

Boser discovers a remarkable cast of characters, including Boston heiress Isabella Stewart Gardner, who stipulated in her will that nothing should ever be changed in her museum, a provision followed so closely that the empty frames of the stolen works still hang on the walls.

The Gardner Heist takes readers inside the art underworld, examining why criminals swipe precious masterpieces—and how museums fail to adequately protect their works. Art theft has boomed over the past few decades, and the illegal trade in stolen paintings and sculptures has become one of the world's largest black markets.

No pun intended, but what drew you to this story?

Boser: In late 2004, I wrote a story about a world-famous art detective named Harold Smith. He had recovered lost Renoirs. He had exposed forged Da Vincis. He had solved the largest gold heist in American history. And he had worked the Gardner caper for years. But within weeks of our meeting, Smith died of skin cancer, and after his death, I decided to pick up where he left off and search for the missing masterpieces.

What's the most compelling or surprising aspect of this case that you can reveal?

Boser: When I first started working the case, the thing that surprised me the most was the size of the art underworld. Art theft has become one of the world's most lucrative illegal activities. Experts believe it's a $4 to $6 billion business. 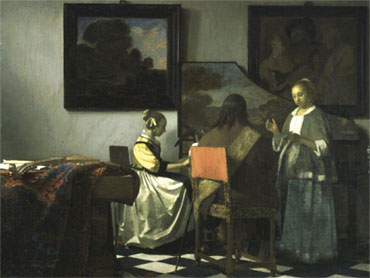 (Isabella Stewart Gardner Museum)
Image: Vermeer's "The Concert" was one of the paintings stolen in the heist.

That said, there is very little romance in art theft. The people who steal art don't wear black turtlenecks. They don't dance through red lasers. While Hollywood often portrays art thieves as sly and skillful, Pierce Brosnan-types with a passion for Impressionist paintings, the reality is far less glamorous. For the most part, the people who swipe paintings and sculptures are run-of-the-mill crooks. They're aging drug dealers, out-of-work bank robbers, ex-cons looking to pay the rent. They steal art because it's easy. They steal art because they want the cash.


What fascinating forensics or investigation details came to light?

Boser: As part of my reporting, I uncovered new evidence that Boston gangster David Turner may have been one of the thieves who looted the museum.

I discovered FBI files that describe how Turner's crime boss, Carmello Merlino, twice tried to return the paintings in exchange for a reduced prison sentence. I spoke to the last witness to see the thieves before they entered the museum, and he described one of the thieves as having Asian eyes, and Turner meets that description. And then when I confronted Turner with evidence of his involvement, he appeared to brag. While he denied having a role in the theft, he told me that I should put his face on the cover of my book.

Turner is currently serving a 38-year prison term for armed robbery; he has never been charged with the museum theft.

I'd encourage people who want to know more about Turner and the other suspects to visit the crime magazine, The Open Case. We've created a page devoted to the Gardner case, complete with police reports from the night of the crime, profiles of suspects, and a toll-free tip line. And please call or send a note if you know anything about the whereabouts of the art or the people who stole the paintings. Remember: There's a $5 million reward.


Is there a hero?

Boser: Harold Smith. No question. He worked the Gardner case for years. He ran down countless leads. He interviewed countless suspects. He flew to England to try and track down the lost paintings. And he did it all while suffering from a deadly case of skin cancer. When I met him, he wore an eye patch, a prosthetic nose, and a bowler cap to cover up all of his painful wounds.

What will it take to solve the case that hasn't happened so far?

Boser: I believe the public will be key to solving the case, because someone, somewhere knows the location of the art, someone, somewhere knows the identities of the thieves. And after nearly 20 years, investigators have examined most of the obvious leads. In short, we need people to come forward. We need tips and leads. Anyone with any information on the case can contact me at uboser@theopencase.com or call my toll-free tips line at 1-888-292-9380. Tipsters can also try the museum's Director of Security Anthony Amore, at 617-278-5114, or theft@isgm.org.

Boser: That's a great question. I think a lot of people think that art theft is a victimless crime, that some wealthy person lost a few paintings, what's the big deal? But the loss of these artworks is a terrible tragedy. As a culture, we have all been victimized by this theft. No one will ever get to see these incredible masterpieces again. The current director of the Isabella Stewart Gardner museum Anne Hawley said it best, when she told me: "Imagine you can never hear a Verdi Requiem or a Beethoven symphony again. Just erased. Imagine Shakespeare's Hamlet. Erased."

(CBS/HarperCollins)
ABOUT THE AUTHOR
Ulrich Boser has written for the New York Times, the Washington Post, Smithsonian, Slate, and many other publications. His work has received various awards and citations. He has also served as a contributing editor at US News and World Report and as a special projects editor at the Washington Post Express. He is the founding editor of the Open Case, a web magazine and online community devoted to unsolved crimes. For more information about Ulrich Boser, visit www.ulrichboser.com.