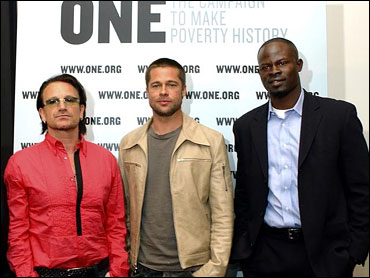 Actor Brad Pitt is among the celebrities featured in new public service announcements for a war on poverty and AIDS, led by U2 singer Bono.

The Irish rock star and political activist says that instead of being focused on donations, the ads for "ONE: The Campaign to Make Poverty History" are aimed at increasing public awareness of the problem and recruiting new advocates for the goals of the campaign.

Visitors to the Web site of the ONE campaign - founded by numerous charitable organizations including Care, DATA, Oxfam, Save the Children, and the International Rescue Committee - are asked to sign a declaration intended to spur political leaders of the world's wealthiest nations into doing more to fight AIDS, starvation and poverty.

"We believe that in the best American tradition of helping others help themselves, now is the time to join with other countries in a historic pact for compassion and justice to help the poorest people of the world overcome AIDS and extreme poverty," says the declaration.

"We recognize that a pact including such measures as fair trade, debt relief, fighting corruption and directing additional resources for basic needs - education, health, clean water, food, and care for orphans - would transform the futures and hopes of an entire generation in the poorest countries, at a cost equal to just one percent more of the US budget," it continues. "We commit ourselves - one person, one voice, one vote at a time - to make a better, safer world for all."

Pitt, who visited Africa after being inspired by Bono's advocacy, said he was struck by how extreme poverty there has made it difficult for the sick to gain access to drugs to minimize the effects of AIDS.

"I've seen it, I've been there, and to walk away from it and turn my back makes me culpable," Pitt said. "And I can't do that."

"Do we really believe in our hearts that we're all equal? And if we believe this, what are we going to do about it?" he said.

Pitt said he believes deeply in the ONE campaign.

Pitt, who stars with Angelina Jolie in the upcoming "Mr. & Mrs. Smith," said he is returning to Africa in several weeks but is unsure what else he will do for the campaign.

"This is just a beginning for me," he said.

Bono, who has been nominated for this year's Nobel Peace Prize, said it is "wholly unacceptable" for children to die for lack of cheap immunizations.

"I'm going to spend the rest of my life on this, I'm going to make that kind of extreme poverty history," Bono told reporters.

Bono and Pitt were joined by Jack Valenti, the former top lobbyist for the film industry, and actor Djimon Hounsou, a native of the West African nation of Benin, where AIDS is a problem and over a third of the population is below the poverty line. Hounsou's film credits include "Beauty Shop," "Constantine," "Gladiator" and "Amistad."

The credit he wants the public to know about right now, however, is a one minute commercial for "ONE: The Campaign to Make Poverty History," which will debut Sunday on various networks and cable channels.

Others appearing in the ads include musicians Mos Def and Jewel; actors Brad Pitt, Penelope Cruz, Jamie Foxx, Tom Hanks and Al Pacino; and evangelist Pat Robertson and the Rev. Frank Griswold, the presiding bishop of the Episcopal Church in the United States.

Completing each other's sentences, each appears in black-and-white, peering into the camera and saying a few words.