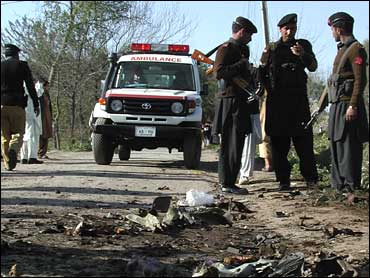 A bomb-laden car exploded Saturday in northwest Pakistan as police tried to pull a body from it, authorities said, killing eight people amid growing international concern over the nuclear-armed country's stability.

Official also said a suicide bomber killed four people at a mosque serving as a militant center in northwest Pakistan.

It was unclear what the motivation was behind the attack. Khan said the mosque was a headquarters for Ansarul Islam, a militant group. The group is a rival to another militant outfit in the area known as Lashkar-e-Islam.

Khan said the bomber tried to enter the mosque but blew himself up at the doorstep.

Separately, Pakistani officials said they were investigating reports that a pilotless U.S. drone had crashed elsewhere in the northwest. The drones are believed to be operated by the CIA and often launch missile strikes against militant targets in Pakistan.

The deepening political turmoil concerns U.S. and other Western officials who want Pakistan to focus on fighting militants. Al Qaeda and Taliban fighters are believed to use pockets of Pakistan's northwest as bases to plan attacks on U.S. and NATO forces in neighboring Afghanistan, as well as against targets in Pakistan itself.

British Foreign Secretary David Miliband said Friday it was "vital" for Pakistani politicians to stop feuding and "unite against the mortal threat that Pakistan faces, which is a threat from its internal enemies."

Militants have staged numerous attacks against security forces near the Afghan border, including a roadside bomb that killed three civilians and wounded four troops Saturday in the town of Darra Adam Khel. Still, the strike that killed seven policemen and a bystander near the main northwest city of Peshawar appeared to be the first to use a body as a lure.

Local police chief Rahim Shah said police went to the Badaber area after an unknown caller told them a body was in a parked car. Residents and police recently evicted militants from the area, prompting threats of retaliation.

"They found the white car. They also saw a body inside, but when they were pulling it out, the car bomb went off," Shah said.

(AP Photo/Mohammad Iqbal)
(People comfort a man at a Peshawar hospital who lost his brother, a police officer, killed in a car bombing, March 7, 2009.)

Pakistan recently claimed victory in an offensive against militants in Bajur, one of the nearby tribal regions overlooking the Afghan frontier. Officials also say they are close to flushing militants from the adjacent Mohmand tribal area. But Pakistan has raised alarm bells in the West by engaging in peace talks with Taliban militants in the nearby Swat Valley.

The U.S. has recently escalated its use of missile strikes against militants in Pakistan, prompting official Pakistani protests. The pilotless drones that launch the missiles often target spots in South Waziristan tribal region, a major militant stronghold from where the reports of the crash emanated Saturday.

Army spokesman Maj. Gen. Athar Abbas said the reports were under investigation. Two intelligence officials, speaking on condition of anonymity because they were not authorized to speak to media, said their informants and agents had yet to locate any wreckage in the rumored crash site of Angoor Ada village.

The rest of Pakistan has not been immune from violence, as demonstrated by Tuesday's attack on the cricket team in Lahore. Heavily armed gunmen killed six police and a driver and wounded several players before fleeing unscathed.

The assault bore some resemblance to November's terrorist rampage in the Indian financial capital of Mumbai. The Pakistani militant group Lashkar-e-Taiba has been blamed for that attack, in which 164 people were killed.

The group's chief spokesman, Abdullah Ghaznavi, on Saturday denied it was involved in the attack on the Sri Lankans. He blamed Indian spies, but offered no evidence to back that up. The group also denies involvement in the Mumbai attacks.

Indian Home Minister Palaniappan Chidambaram declared Friday that Pakistan could become a failed state, according to a news report.

"In Pakistan, with regret, I would say we don't know who is in control there - whether it is the army or the president or the government," the Press Trust of India quoted Chidambaram as saying. "It is not a failed state, but it is threatening to become one."

The federal government recently dismissed the provincial government, led by Sharif's brother, after a court disqualified the Sharifs from elected office. Their party intends to participate in a massive march on the capital in the coming week organized by lawyers calling for an independent judiciary.
By Associated Press Writer Riaz Khan; AP Writers Munir Ahmad in Islamabad and Ishtiaq Mahsud in Dera Ismail Khan contributed to this report