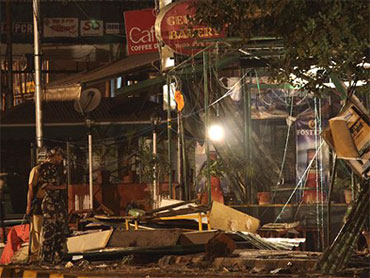 A bomb detonated in a crowded bakery popular with foreigners in western India killing nine people and wounding 57, officials said Sunday, the first terrorist attack in the country since the 2008 Mumbai massacre.

The blast Saturday in the city of Pune, 125 miles southeast of Mumbai, threatened to damage new efforts to reduce tensions between nuclear-armed rivals India and Pakistan, with Hindu nationalist leaders placing blame for the attack on India's Muslim neighbor.

"It was a bomb lying in an unattended bag," Home Minister Palaniappan Chidambaram told reporters Sunday after visiting the bakery and the wounded in hospitals.

Six people died at the scene and three later succumbed to injuries at hospitals, he said. Of the 57 wounded, 19 were released from medical facilities.

Chidambaram said forensic experts were trying to determine what explosives were used and how the bomb was triggered.

"All the information available to us at the moment points to a plot to explode a device in a place that is frequented by foreigners as well as Indians," Chidambaram said.

Home Secretary G.K. Pillai earlier said the blast occurred at 7:30 p.m. at the German Bakery, near the Osho Ashram, a renowned meditation center.

It was the first terrorist strike in India since 10 Pakistan-based gunmen rampaged through hotels and a train station in the financial hub of Mumbai for 60 hours in November 2008, killing 166 people.

"It appears that an unattended package was noticed in the bakery by one of the waiters who apparently attempted to open the package when the blast took place," Pillai told reporters.

The building and nearby shops were badly damaged and splattered with thick patches of blood and several limbs. "I came running to the bakery after hearing the explosion. I found people lying all over the place," said Abba More, who lives nearby.

One foreigner was among the dead, but his nationality was not immediately known, Pillai said. Chidambaram said a Sudanese national was among the wounded in the blast.

The bombing came as ties between India and archrival Pakistan appeared to be warming. The two countries agreed to hold talks in New Delhi on Feb. 25, their first formal negotiations since the Mumbai attacks.

Asked whether the explosion was linked to the India-Pakistan talks, Pillai said: "Forensic investigations have just begun. Till they are completed, we will not know who is (involved)."

But Gopinath Munde, a senior Hindu nationalist Bharatiya Janata Party leader, asserted, "This again is an attack from Pakistan."