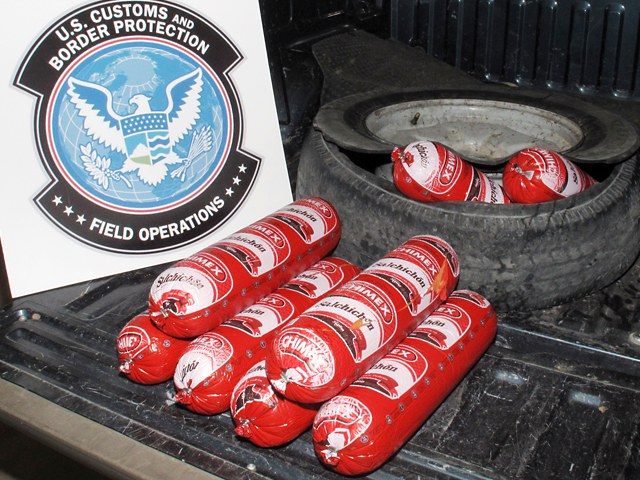 (CBS/AP) ALBUQUERQUE, N.M. - Name three things that get smuggled into the U.S from Mexico:

A New Mexico resident has been cited after federal officials say he tried to smuggle 76 pounds of illicit lunch meat from Mexico by hiding it in a spare tire.

U.S. Customs and Border Protection said last week that the eight rolls of Mexican bologna were discovered aboard a truck at an El Paso port of entry on Friday.

According to officials, officers detected an anomaly in the appearance of a Ford F-150 as it arrived at the Paso Del Norte international crossing port. Agents scanned the spare tire with a density meter.

When they opened the spare tire, officials said agents found the bologna hidden inside.

"This bologna is a prohibited product because it is made from pork and has the potential for introducing foreign animal diseases to the U.S. pork industry," CBP El Paso Port Director Hector Mancha told CBS affiliate KRQE. "This is a highly unusual seizure because of the concealment method."

The driver was assessed a $1,000 civil penalty and was released.

We figure the folks at the customs bureau had a filling lunch.