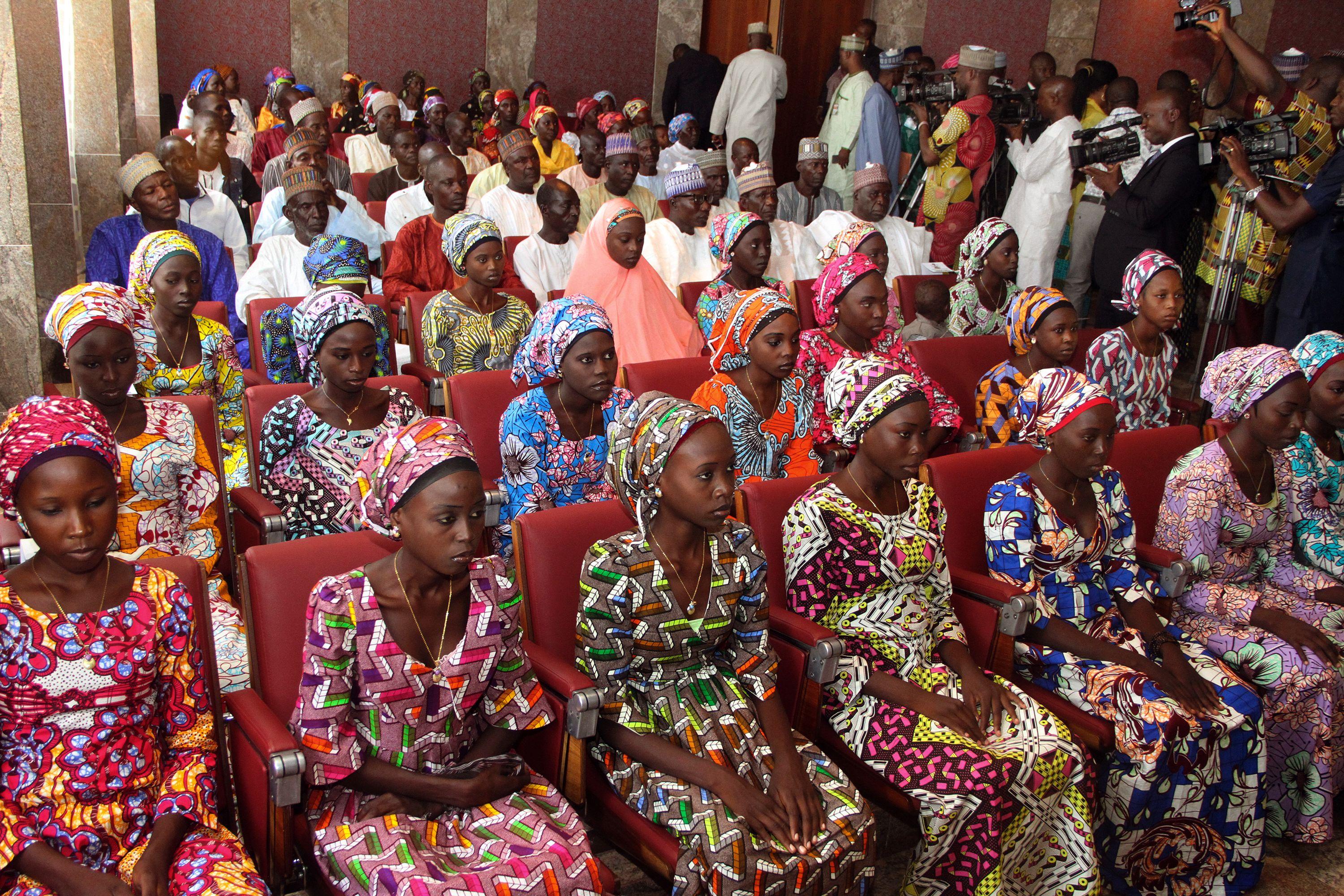 LAGOS, Nigeria -- She was found wandering in a forest, the first of the nearly 300 Chibok schoolgirls kidnapped by Boko Haram to escape on her own and reach freedom. That was in May. Since then, Amina Ali Nkeki has been sequestered by Nigeria’s intelligence agency, embraced just once by her family months ago.

Some say Nigeria’s government is keeping the young woman silent because it doesn’t want her telling the world about military blunders in the fight against the Islamic extremist group, and about her desire to be reunited with the father of her child - a detained former Boko Haram commander.

“I worry, sometimes, that I don’t know if she is alive or dead,” her mother, Binta Ali Nkeki, sobbed during an exclusive telephone interview with The Associated Press from her remote northeastern village of Mbalala. She said she hasn’t seen her daughter since July.

Sunday marks 1,000 days since the mass kidnapping, and most of the Chibok schoolgirls remain in captivity. The few who have been freed, like Amina, have found themselves not completely free.

The mass abduction horrified the world and brought Boko Haram international attention. The failure of Nigeria’s former government to quickly act to free the schoolgirls sparked a global Bring Back Our Girls movement, with even U.S. first lady Michelle Obama posting a photo with the logo on social media.

Amina was the first to escape on her own. Months later, in October, the government negotiated the release of 21 Chibok girls. Another girl was freed in November in an army raid on an extremist camp in the Sambisa Forest. On Thursday, yet another girl was found during military interrogations of Boko Haram suspects, along with her baby.

In December, when Amina’s mother heard that “freed” Chibok girls would be allowed to come home for Christmas, she borrowed money for transport to reach the town where the girls were kidnapped from a government boarding school in April 2014.

When Binta reached Chibok, she was welcomed by the 21 girls, who tried to reassure her that her daughter was “fine, in good health,” even though she had not been allowed to accompany them.

Human rights groups and lawyers have criticized Nigeria’s treatment of the freed girls, who are held in Abuja, the capital, nearly 560 miles from Chibok. The government says the girls are getting medical attention, trauma counseling and rehabilitation.

Officials in the government and the presidency did not respond to requests for comment, following a familiar pattern.

People who have spoken to the freed girls say they have stories that the government does not want told, including that three Chibok girls were killed last year in Nigerian Air Force bombings of Boko Haram camps.

Amina has said she wants to be home with her mother, and she has insisted that the father of her child is a victim, like herself, who was kidnapped by Boko Haram and forced to fight for the insurgents.

Her mother says that when her daughter was rescued - hunters found her, the father of her child and the 4-month-old baby in a forest - she said she didn’t want to go back to school. But her mother and brother, Noah, persuaded her to take up Nigerian President Muhammadu Buhari’s promise to give her the best education possible.

“They told her that soon she will be starting school,” Noah Ali Nkeki told the AP in an interview. He got the news in a rare phone call from his sister on Thursday, the first time he had heard from her in three months.

He cannot call her. Officials call him using a blocked number and then put his sister on the line. The girl’s mother doesn’t get to speak to her because she doesn’t own a cell phone and reception in her village is poor.

“I don’t know what the government is trying to do. They have had her now for seven months,” Noah said.

Binta, a gaunt woman whose eyes mirror the pain of a hard life and whose hands are rough from farming, was widowed five years ago. Eleven of her children have died, in childbirth or soon afterward. The only survivors are her son and only daughter.

“I wonder how my only grandchild is doing,” she said of Amina’s daughter, Safia. “Do you think she’s walking by now?”

Binta was suicidal after her daughter’s kidnapping, community leaders have told the AP, after hearing reports of Boko Haram’s threats to sell the kidnapped girls into slavery, marry them off to fighters and force them to convert to Islam. Chibok is a Christian enclave in mainly Muslim northern Nigeria.

Binta rallied after she got a message from Amina in 2015, when Boko Haram attacked Chibok again. Two male fighters accompanied by a girl carrying ammunition came across an elderly woman too feeble to flee. The girl, speaking the Chibok language that the fighters could not understand, asked the woman: “Do you know who I am? I am Amina. My mother’s name is Binta in the village of Mbalala. Please tell her you saw me.”

The elderly woman described the encounter to community leaders, who deliberated, worrying that the “proof of life” message might be too much for her mother to bear.

Then human rights lawyer Emmanuel Ogede stepped in. “I suggested that they pass on the message. If I had a daughter who was missing, and she tried to send a message to me, l’d be very upset if someone withheld it. Amina tried to reach out, let’s help her complete the effort,” he counseled.

Ogede is upset about the politicization of the freed Chibok girls.

When Amina was freed, she and her family were flown to Abuja, where TV cameras and photographers documented Buhari welcoming her at the presidential mansion. That happened again with the 21 freed girls.

The girls needed trauma counseling and medical care, not exposure to the media, Human Rights Watch said at the time.

On Christmas Day, the freed girls visiting Chibok did not get to see their parents. They were kept in the house of a local legislator until Borno state Gov. Kashim Shettima arrived to “present” them to their parents the next day. Witnesses said the girls were angry that they were kept from going to their homes and to their church’s Christmas Day service.

Shettima’s spokesman, Isa Gusau, denied that version, which came from some of the parents. “I am not sure they were denied access to their parents because that was the essence of them being taken to Chibok in the first place,” he told the AP. “If you say their movements were restricted for security reasons and for their safety, I think that makes sense.”

Yakubu Nkeki, chairman of the Chibok association of parents of the kidnapped girls and who is not related to Amina, said the Department of State Security intelligence agents who accompanied the girls deemed it was unsafe for them to visit parents in outlying villages. But those with homes in Chibok town were not allowed to stay with their parents, either.

Amina’s mother, despite her tears, still has some faith in Nigeria’s actions.

“Anything that the government wants to do with Amina, I have no problem with that,” she said. “But I just want to see my daughter with my own eyes.”