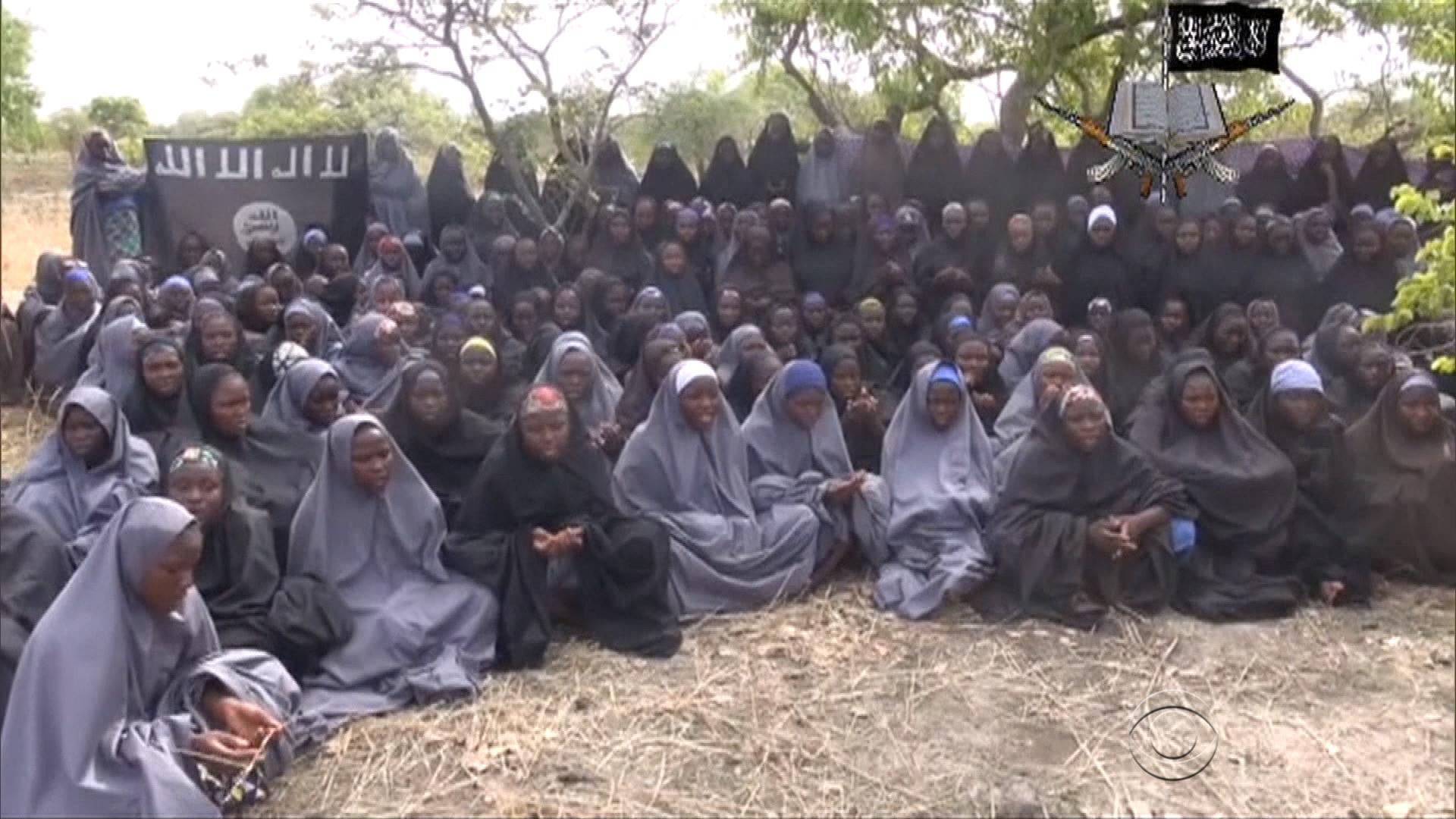 LAGOS, Nigeria --A video appearing to show some of Nigeria's kidnapped Chibok girls is being aired along with images of tearful parents recognizing their daughters, who have not been heard from since the mass abduction by the Islamic extremist groupBoko Haram two years ago.

CNN on Wednesday showed video, believed made in December, of girls wearing the Islamic hijab covering and of one mother reaching out to a computer screen as she recognizes her daughter.

On the night of April 14, 2014, Boko Haram kidnapped 276 schoolgirls from the Government Girls Secondary School in the northeast town of Chibok. Dozens of girls later escaped, but 219 remain missing.

While Boko Haram is thought to have abducted thousands of people over the years, the mass abduction brought the extremist group to the world's attention. The campaign hashtag #BringBackOurGirls went as far as the White House, used by U.S. first lady Michelle Obama.

The failure of Nigerian officials and the military to rescue the girls brought international condemnation and contributed to President Goodluck Jonathan's loss in elections last year.

Jonathan at first had denied there had been a mass abduction, but international pressure soon forced him to accept help from other countries.

The United States, Britain and France were among those that sent advisers, including hostage negotiators. U.S. and British drones located at least one group of about 80 of the girls, which was reported to Nigeria's government and military, but nothing was done.

Andrew Pocock, who was British high commissioner to Nigeria until his retirement last year, told The Sunday Times magazine last month that it was considered too dangerous to the other girls to try to launch a ground or air rescue. "You might have rescued a few, but many would have been killed.... You were damned if you do and damned if you don't," the magazine quoted him as saying.

Nigeria's military has cited the same fears. Yet that has not stopped them from attacking towns and villages where Boko Haram has held thousands of civilians captive. The military boasted last week that soldiers have rescued 11,595 civilian hostages since Feb. 26.

But none has been from Chibok.

CBS News' Pamela Falk reported that the U.N. children's agency, UNICEF, released a report on Tuesday showing that the number of children involved in suicide bombing has risen tenfold in the last year in the Lake Chad region, which includes Nigeria, Cameroon, Chad and Niger.

One in every five suicide bombings is perpetrated by a child. Three-quarters of them are girls as young as eight years old. They are victims, the U.N. says, of slavery and rape.

The report, "Beyond Chibok," says 2.3 million people have been forced out of their homes in the last three years. And the other findings are equally grim.

"Boys are forced to attack their own families to demonstrate their loyalty to Boko Haram, while girls are exposed to severe abuse including sexual violence and forced marriage to fighters," the report states. "Some are also used to carry or detonate bombs."

Laurent Duvillier, spokesperson for UNICEF in West & Central Africa, told CBS News that the world was shocked by the 2014 abduction. "But what did not get so much attention is what happened after this: over 2,000 women and girls have been abducted since then in about four countries, not just Nigeria."

Duvillier continued, "What we see today is that the humanitarian situation has seriously deteriorated. One year ago, on the first anniversary of Chibok, there were 800,000 people displaced; today, 1.3 million children alone are displaced, an increase of 60 percent."

CNN reported that the "proof of life" video was sent in December to negotiators trying to free the girls. It shows an interview with Information Minister Lai Mohammed saying the government is reviewing and assessing the video.

Senator Shehu Sani, who has been involved in past negotiations with Boko Haram about the Chibok girls, told The Associated Press he found the video credible. Yakubu Nkeki, leader of a support group of parents of the kidnapped girls, said he briefly saw part of the CNN video, in between power blackouts frequent in Nigeria, and recognized some of the girls.

"We are all well," one of the girls says in the video, emphasizing the "all." There have been fears that Boko Haram's increasing use of female children and adults to carry out suicide bombings indicate they are turning captives into weapons, including the Chibok girls.

Some hopes were raised last month when a girl suicide bomber who surrendered to authorities in neighboring Cameroon said she was from Chibok, but turned out to be from a nearby town in the local government area that bears the same name as the town.

There's been no word of the girls since April 2014, when Boko Haram leader Abubakar Shekau said they had converted to Islam and threatened to sell them into slavery or forced marriage with his fighters. Many recently freed girls are pregnant.

If any Chibok girls get home, some will miss their parents. Two mothers and 16 fathers have died since the mass abduction, some of them victims of Boko Haram attacks. Others died from illnesses blamed on stress, according to Nkeki, who spoke to the AP by phone from Chibok.

Nigeria's Vice President Yemi Osinbajo is due in Chibok on Thursday for the anniversary of the kidnappings, Nkeki said, complaining the issue has become politicized. He said the community is angry that their only school remains in the ruins created by Boko Haram, which firebombed buildings as they took off with the girls.

"Boko Haram has achieved its aim. They say they don't want us to have Western education and our children don't," he said.