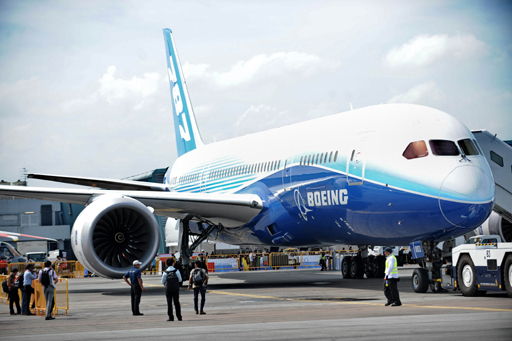 The results announced before the markets opened Wednesday eased investors' fears of an imminent slowdown in the company's defense unit, which produces Chinook helicopters and F-18s among many other aircraft models. They also highlighted strong growth in the company's commercial airplane unit which has been rapidly increasing the pace of production for some planes to meet demand.

Analysts polled by FactSet had expected earnings of $1.13 per share on revenue of $19.28 billion.

Defense revenue rose 7 percent, while revenue in the commercial airplane division jumped 34 percent. The divisions are roughly the same size, but some observers fear they will go in opposite directions.

Boeing's defense unit is vulnerable to potentially severe military spending cuts in January. The cuts would be automatic unless Congress agrees to an alternative for cutting the deficit. The military would face $492 billion in cuts over a decade, with domestic spending reduced by another $492 billion over 10 years.

But it's clear the unit is still holding strong. The second-quarter revenue growth is about the same as Boeing saw in the first three months of the year. Defense contractor Lockheed Martin had reported second-quarter results that surprised Wall Street earlier.

Boeing's commercial airplane unit, meanwhile, is rapidly speeding production and deliveries of its new 787. That will move planes that have been mostly finished, but undelivered, out of inventory and turn them into cash. Boeing is also booking firm orders for its new 737 Max, a redesigned version of its classic 737.