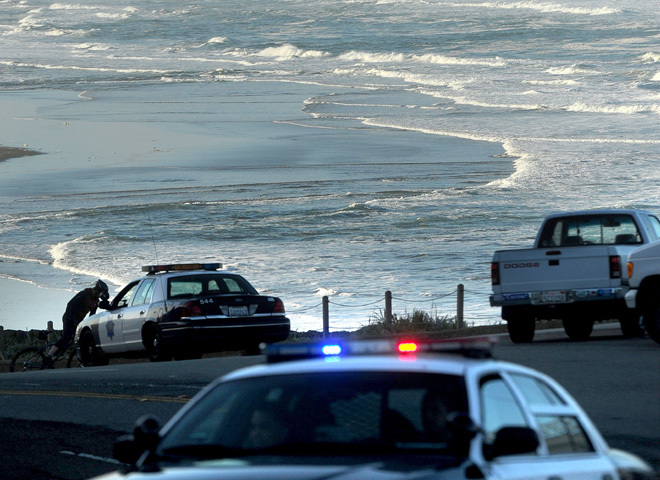 GRANTS PASS, Ore. - The body of a man washed out to sea last month when the tsunami from Japan hit the Northern California coast has been found 330 miles north in Oregon near the mouth of the Columbia River, the Oregon State Medical Examiner's Office said Tuesday.

"It was just somebody who made a mistake, not knowing what was going on," Jon Weber, of Bend, said of his son's death.

"As far as they knew, it was all over with," Jon Weber said. "The wave came in and that was it."

Dustin Weber was the first person killed by a tsunami on the West Coast since 1964, when 11 people in nearby Crescent City, Calif., died from the surge created by an earthquake in Alaska.

The tsunami swept at least five people out to sea in California, but four were rescued shortly after the wave struck following the March 11 earthquake in Japan.

Dustin Weber had moved from Bend to Requa, Calif., to start a new life on the Yurok reservation at the mouth of the Klamath River, where his mother grew up, two weeks before the March 11 tsunami. He was fixing up a house given to him by his grandmother, family members have said.

Thinking the initial tsunami surge had passed and that subsequent waves would be small, Dustin Weber hiked with two new friends from off the reservation down a steep and narrow path that winds through thick brush. It runs past a rock formation said to resemble a Yurok woman with a basket on her back, to a small rocky beach on the north side of the Klamath River, family members have said. His two new friends tried to save him, but couldn't.

"They just couldn't get him," said Dustin Weber's mother, Lori Davis, of Bend. "The wave just came so fast and hard. They were soaking wet, both of them. They were lucky they weren't taken also."

The currents along the shore would usually take a body to the south. But the tsunami would have taken it miles out to sea, where it was pushed north by the winds from winter storms that have been unusually numerous and intense this year, said Humboldt State University tsunami expert Lori Dengler.

"Wow," she said upon learning of the distance the body had traveled. "I must admit that I am surprised."

The biggest of the tsunami surges measured 8.1 feet in the harbor at Crescent City, about 20 miles north.

Family and friends searched the beaches for days, using ropes to descend the steep embankment to reach some of them, with no sign of the body.

Davis said her boyfriend told her the news of an unidentified body found near Astoria after reading about it while visiting Eugene, and she immediately contacted authorities there.

Jon Weber said the family has already held a memorial service for his son, and published a notice in the newspaper, but had not yet developed firm plans on what to do next. He was thinking about spreading some of his son's ashes along trails leading to hot springs at Paulina Lake in the Cascade Range south of Bend, where they would go to soak and relax.

"The last time it was just him and I and the bald eagles and the golden eagles, and we set there and enjoyed life a few moments," he said.

Davis said she would put some beneath a headstone in a family cemetery near where her son died.

"We can finally put this to rest and go on with our life," she said. "And just remember Dustin the way he used to be and the way he made us all feel good inside. He just brought smiles to our face every time we looked at him. He was just such a beautiful, handsome man."