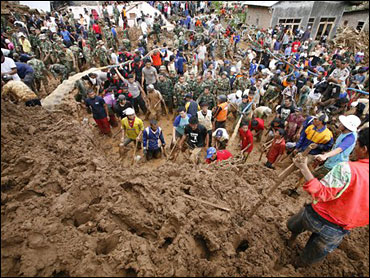 Rescuers pulled dozens of corpses from villages devastated by landslides and floods in western Indonesia as wailing relatives Thursday looked on in horror. At least 87 were killed or feared dead and tens of thousands forced from their homes.

Days of torrential rain sent mud crashing down into villages in hilly districts of Java island, but 24 hours later authorities were struggling to get backhoes and diggers past blocked roads.

Most of the victims were killed in the village of Ledoksari in Karanganyar district.

"I am searching for my cousin and my sister who are still buried beneath the mud," said Wiryo Hamidi as he dug with his bare hands through the remains of his village. Elsewhere, rescuers used hoses to wash away at the mud. "I hope we can find them today so I can bury them."

Villages, police and soldiers uncovered 12 more corpses in the village on Thursday, several of them children, said Heru Aji Pratomo, the head of the local disaster coordinating agency.

A crying relative threw herself to the ground while another held her head and screamed as mud-caked bodies were put into black bags and taken away for burial, footage on Metro TV showed.

In east Java province, police were searching a swollen river after a bridge was swept away Wednesday as several motorbikes passed over it. Two people were reported missing, said local police Capt. Sunarta, who uses only one name.

"No one else is missing that we know of," he said, adding that authorities had tracked down the owners of 13 motorcycles and bicycles recovered from the water.

Rivers bloated by days of rain burst their banks in the towns of Solo and Sragen, forcing more than 28,000 people to leave their homes, said Rustam Pakaya, a disaster official in the ministry of health. Witnesses said water levels were a meter high in places.

Pakaya said 87 people had been killed or were missing and feared dead in the landslides.

Seasonal rains and high tides in recent days have caused widespread flooding across much of Indonesia, the world's fourth most-populous nation. Millions of people live in mountainous regions and near fertile flood plains that are close to rivers.