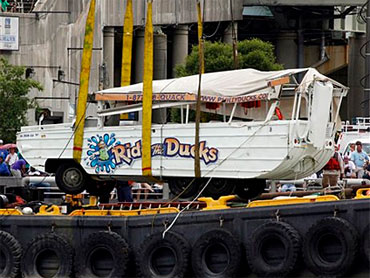 The bodies of two missing Hungarians who were aboard a tourist boat that was hit by a barge and sank into the Delaware River this week have been recovered, and investigators were set to continue their search Saturday for clues about the collision.

The body of 16-year-old Dora Schwendtner was spotted by a crew on a fishing boat before dawn Friday about two miles downriver from the site of Wednesday's crash. The second body was retrieved later in the day, after a barge brought in to help to lift the amphibious duck boat off the river's bottom was moved, and was identified late Friday as that of Szablcs Prem, 20, the other missing Hungarian tourist.

Both victims were identified based on personal effects, said Jeff Moran, spokesman for the Philadelphia medical examiner's office. He said both died of drowning and the manner of death was ruled an accident. Coast Guard officials are working with the Hungarian embassy to arrange return of the remains.

The six-wheeled duck boat, carrying 35 passengers and two crew, had been stopped five to 10 minutes before the crash. Crew members told investigators they shut off the engine after white smoke that smelled like burning rubber came out of the hood.

Crew members said they told passengers to put on life jackets just before the collision.

Within seconds, the boat capsized and sank, though there were no serious injuries among the rescued passengers.

Investigators are left with several questions: How did the crash happen? What caused the duck boat to spew smoke? Did its skipper let other vessels know it was adrift? Did the captain and crew of the tug boat pushing the empty barge know - or should they have known - the duck boat was idle in the water, its anchor deployed?

The NTSB spent Friday interviewing the two crew members and 16 passengers on the duck boat.

"They told amazing stories of heroism," said NTSB member Robert Sumwalt. "One young man said he gave his life jacket to someone else, then he swam to shore."

Interviews with the five crew on the tug were scheduled for Saturday.

Joseph Dady, president of the National Mariners Association and a tug boat pilot himself, told The Associated Press that tugs always have blind spots when they're pushing barges.

In this case, where the tug's wheelhouse was relatively low and the barge was light and floating high in the water, the blind spot could have been large, he said.

The Coast Guard requires lookouts on board tugs or barges in such situations. Dady said they're often not posted and the rule is rarely enforced, though U.S. Coast Guard Capt. Todd Gatlin disputed that.

Tug pilots are also required to use radar, but the duck boat did not have a radar reflector, so it's not clear whether it would have shown up on a boat's radar.

Darrell Wilson, a spokesman for K-Sea Transportation Partners, which operates the tug, said he would not discuss whether a lookout was posted or whether the radar was working.

Another question is whether the tugboat pilot heard any distress signal from the duck boat.

The boat's 58-year-old captain, Gary Fox, had put out a distress call on Channel 13, which is monitored by boaters but not recorded, said Chris Herschend, president of Ride the Ducks, the Norcross, Georgia-based company that owns the boat.

Fox told the NTSB that he tried to sound his boat's air horn when the barge was less than 400 yards away, Sumwalt said. But the air horn, which Fox said worked in a test that morning, didn't sound.

The Coast Guard has said that it received a transmission over an emergency channel around the time of the collision, but that no voices or other recognizable sounds could be discerned. It wasn't clear whether that signal was heard, or understood, on the tug.

Black flags were raised Friday at the victims' school and at the city hall in their hometown of Mosonmagyarovar, in northwestern Hungary. School principal Karoly Hansagi told the state news agency MTI that a candlelight vigil would be held Saturday night.

Philadelphia Mayor Michael Nutter said there would be a private memorial for the victims at 11:30 a.m. Saturday at Independence Seaport Museum. After that, there was to be a public laying of wreaths and flying of doves.

Ride the Ducks has been in Philadelphia since 2003. Passengers are driven on a tour of the Old City neighborhood near Independence Hall before riding into the Delaware River from a ramp south of the Ben Franklin Bridge.