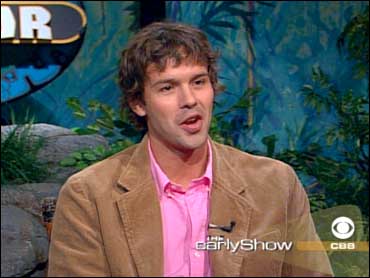 On Thursday night's "Survivor: Guatemala," former NFL quarterback Gary Hogeboom pulled a last minute "Hail Mary" on the final play of the game, sending Bobby Jon Drinkard back to the locker room for the second season in a row.

"It was just a total shocker," Bobby Jon tells The Early Show co-anchor Harry Smith. "And I knew right then I was gone. I was making sure I had my shoes and socks. I knew I was gone."

And, like Bobby Jon, nobody in the tribe knew the immunity idol was in Gary's possession — especially since Judd Sergeant, as the winner of the reward challenge, received a clue as to where the idol wasn't.

"That was a daily chore, a daily game for everyone to go and do every day," Bobby Jon says. "It gave everyone something to do. Of course you want to find it. And if you don't, then you could go home. And that's what happened to me."

Judd shared his clue with Stephenie LaGrossa, but deceived the rest of the tribe as to where it could be hidden.

But the idol was up in a tree. The Early Show's secret scene shows Gary finding the coveted idol.

Walking around a big tree, Gary says to the camera: "I've been looking in this tree because that's an ancient Maya — they worshipped these trees. Lo and behold, I see the idol. I do have to expose Judd, lying to the group about it being on the ground. This is highly secret. I'm going to keep it till I need it, which could be tonight. I'm going to keep it in my pants' pocket until I get back to camp. I'm excited. This is good stuff."

Gary had followed Judd and noticed that Judd was looking up, not down, when searching for the idol.

"He has a lot of experience about working hard. So he found it. It paid off," Bobby Jon says about Gary.

It paid off because, behind Gary's back, Jamie Newton was plotting against him, telling the tribe it was Gary's plan to get rid of him. Though it was a lie, Jamie still managed to convince the tribe it was time for Gary to go home.

For his part, Bobby Jon tried to convince Judd and Jamie that it was better to keep him in the game because Stephenie will vote against them in the end. And Bobby Jon was assured Gary was the one going home.

"I'm pretty gullible when it comes down to it," he says. "They told me I wasn't going home, so I believed them. That's pretty much the way I went with it."

It may seem odd that Bobby Jon would trust Jamie since they had such an explosive relationship during the game.

"I think Jamie and I, were a lot alike," Bobby Jon says. "We're friends now. We moved on. I could pick up the phone and call him right now, and vice-versa. He's a good guy. I think just being some of the places we're from, we're a lot alike. When that happens, you tend to butt heads."

At one point during that giant ball challenge, it looked like they were going to tear each other's flesh off. But Bobby Jon says, "I didn't think it would ever get that far."

He did think, however, he would stay longer in the game. But like the Guatemalan heat, the lying has intensified.

"You're not out there playing for five bucks. It's a million dollars," Bobby Jon says. "People do what they got to do. That's the name of the game. There's no rules. There's none."

And Stephenie is playing her cards well this time around.

"She's a mover and a shaker," Bobby Jon says. "When you're competing, you use the best strength that you have. She has a lot of them and she can do it."

Even if the conditions are tougher this time around than when they competed in Palau.

"The heat and the humidity, which I'm sure a lot of the contestants have told you thus far, it's brutal. You can say it, but until you're there it's hard to deal with."

Well, Bobby Jon may not have won the game but he made it to the jury.

"I was hoping," he says. "But I guess it happens to the best of them."

And there are no regrets. The experience he says was "definitely very benefiting, inside and out."

Now that he is out of the game he is living in Los Angeles, he says he is pursuing acting and modeling work.

"Hopefully it works out," he says. "But, I still love Troy, Ala., and might move on back there. Who knows?"

So would he consider competing in another "Survivor" if he is asked to play a third time?

"It might be time for me to hang this up this time," Bobby Jon says.

Six-Word Memoirs Can Say It All